Stark Insider continues its ongoing coverage of the Mill Valley Film Festival (MVFF) with an interview with James Franco and Lola Sultan at the screening of In Dubious Battle. Past segments include: Nicole Kidman (Lion), Amy Adams (Arrival), and Emma Stone (La La Land).

The guy will just not stop.

James Franco continues to defy any definition of rational workload. The actor-director-writer-artist-producer-teacher has an ambitious new project making the film festival rounds. In Dubious Battle, adapted from one of John Steinbeck’s earlier and lesser known novels (published in 1936), tells the story of a fruit-workers’ strike in California.

“I always liked Steinbeck.”, says James Franco while attending the screening at the Mill Valley Film Festival this past weekend. “I had done a production Of Mice and Men on Broadway two years ago. After that I realized I wanted to do more Steinbeck, maybe a film. In Dubious Battle was one that was lesser known, but it had never been adapted.”

And then there’s the (literally) little name: Lola Sultan. 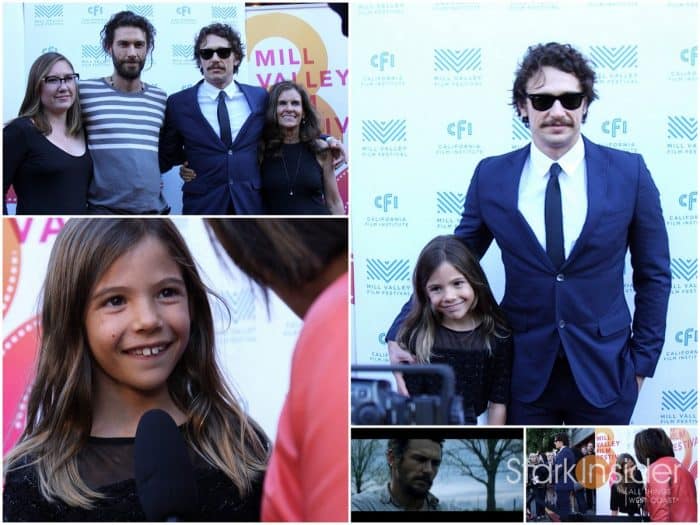 Talking to Lola outside the CineArts Sequoia in Mill Valley, I realized I had finally — finally — interviewed someone shorter than me. Then again, she’s only nine years old. I also discovered that although this is her feature film debut, Lola is incredibly composed for her age. Witty too. And I should point out, most importantly, smart enough to know to throw in a compliment or two to her fellow actor and director James Franco — the guy “up there.”

“I got to meet Nat Wolff and other people.”, said Lola Sultan moments before the screening at MVFF. “And I got to be in a movie that James Franco is in.”

One problem though… she didn’t get to see Franco often. Because he was “up there” and she was “down here” — hmm, I think I can relate.

My understanding is that the producers are still looking for domestic distribution for In Dubious Battle. The $15 million epic has been receiving very positive reviews from festival go-ers. I hope it can make it to either theatrical release, or possibly more likely to somewhere like Netflix or Amazon Prime.

“I thought it would be incredibly cinematic,” Franco said. “So we got the rights.”

Long-time Stark Insider readers may recall my “Goofball” encounter with James Franco at the premiere of Danny Boyle’s 127 Hours. It was one of my first interviews. Safe to say, I piled on a few errors — “127 Days”? Oh well, you live and learn, and hopefully you get another chance. Thankfully, Franco, as you can see in the above video of his 2016 MVFF appearance, was gracious, generous with his time, and also kind enough to share the moment with not only up-and-comer (and super-cute) Lola Sultan, but also with some of his family.

As for the genesis of the “goofball”? I know, we are all so anxious to know. It came about when James Franco spent time with hiker and 127 hours subject Aron Ralston. I asked him what he thought of Aron. He said he was a “little goofball.” We took what we could and ran with it, for better or worse. Are you a goofball? Am I a goofball? Dig deep, this is Stark Insider.

Until we meet again!

Mill Valley Film Festival runs through Sunday, October 16, 2016. Get out there if you can. Marin (just north of San Francisco) is a beautiful place to spend time, and watch some movies.

WATCH: James Franco and Lola Sultan talk about IN DUBIOUS BATTLE, walking through mud, John Steinbeck, and the possibility of Franco being a “Goofball”