The Velocity of Autumn

Even before The Velocity of Autumn begins, you begin to unwrap the layered set of this TheatreWorks Silicon Valley offering, with its luminous exterior views framing the cluttered interior of 80-something Alexandra’s (Susan Greenhill) Brooklyn flat.

The tension between inner and outer world builds when an intruder tries to break in through her second floor window before you realize he’s too comically awkward to be a threat to her.  The intruder, (who initially towered over  Alexandra dozing in a rocking chair) is Chris (Mark Anderson Phillips), sent by his siblings to deal with his aging mother, whose Molotov cocktails litter her home.

Everything in these first few minutes — the looming threat, Alexandra’s aged infirmity mirrored by Chris’s ineptitude, panic shading into exasperation, intrusion from the outside — becomes a thread that winds its way through the next 90 minutes, yielding a web so complex that it overcomes several of the work’s shortcomings. Director Giovanni Sardelli doesn’t try to reduce this to a one-dimensional struggle about aging and independence. Instead, The Velocity of Autumn takes on family, outsiderness, and being an artist, as well.

Playwright Eric Coble loves his characters, and lavishes them both with one-liners that ring so true they occasionally raised a gasp of recognition from the audience. Alexandra indignantly rails about her present condition with an honesty that isn’t hobbled by her increasing loss of words. If at times she verges on a predictable quirkiness, that formulaic cross between endearing old lady and Molotov-clutching terrorist, Coble’s quick wit helps compensate.

Mark Anderson Phillips invests Chris’s character with comparable tensions, which express themselves more on a body level. One moment he’s bizarrely awkward for one so enormously tall (compared to Alexandra), and the next his gestures become repetitively strident. At the end, he moves easily, directing his energies toward bridging Alexandra’s re-entry into the world. Locally, Phillips has appeared in Time Stands Still, The Big Meal, Fallen Angels, and many others. His physicality is different here, making his performance fascinating to watch. 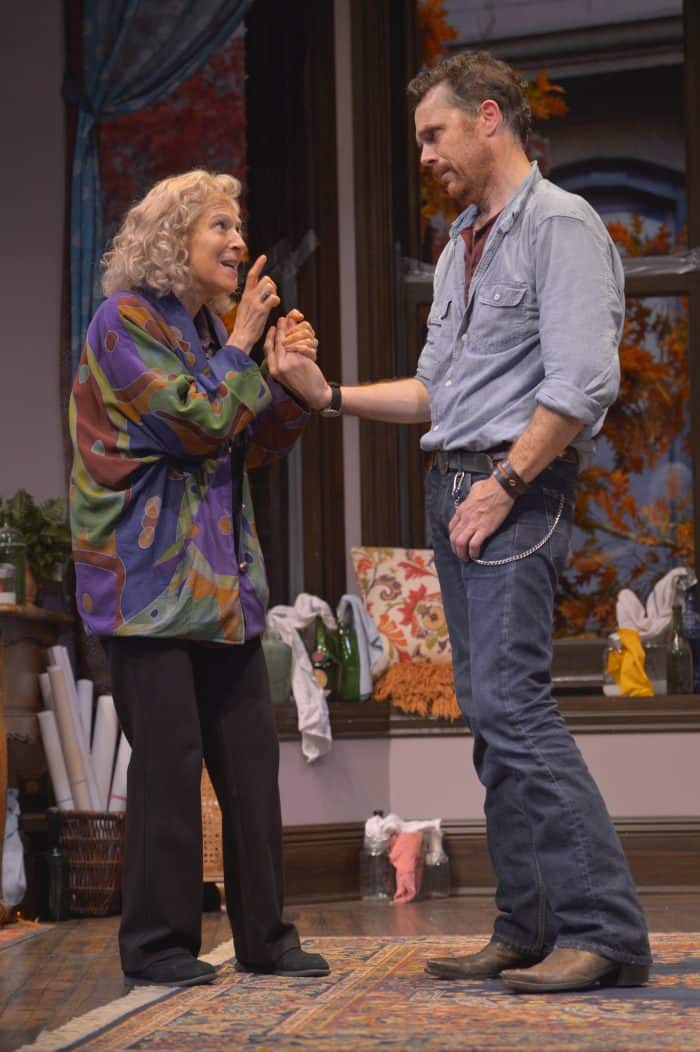 I’d be remiss if I failed to point out the obvious. Two major Bay Area theatres, TheatreWorks, with The Velocity of Autumn, and Berkeley Rep with For Peter Pan on her Seventieth Birthday chose to end this season with works centered around an older female. Given ongoing complaints throughout the theatre community about nonexistent roles for older women, this is particularly refreshing.