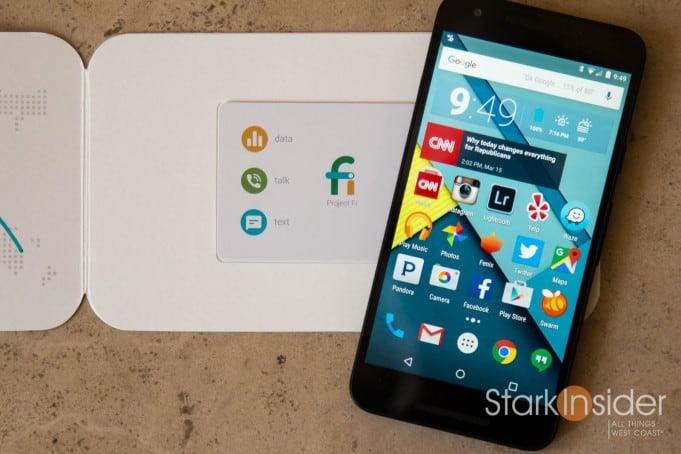 For Google the same old does not apply. Case in point: Project Fi. In my initial tests the innovative cell service stands out from the crowd, providing quality coverage, flexible SIM card management for secondary devices, and, maybe best of all, no contracts, no cancellation fees, and bills you can actually understand–the gall!

I made the jump from T-Mobile’s $30 pre-paid plan (100 minutes talk, unlimited text, unlimited data with 4G up to 5GB) when Google teased with the Nexus 5X promotion. For just $199 Google would send a 5X phone with a Project Fi starter kit. There was no obligation, so you could cancel the next day, and still get to keep the phone which normally retails for $349. Pretty sweet. I was tentative, and didn’t outright cancel my T-Mobile plan. But, after a few weeks on Fi, I’m getting that feeling, that wonderful feeling, that… the future’s so bright I gotta wear shades.

Yes, Project Fi is great. And it’s very much welcomed in an industry that has seen little innovation; though, thankfully, unlocked phones have become the norm, allowing us to swap-out SIM easily, and break free from the carrier death grip.

Okay then, fair enough, the proof is in the pudding, and here’s 5 specific things I especially like about Google’s cool, new (and now invite-free) Project Fi cell plan.

Pay as You Go

Project Fi pricing is really simple. And you pay for what you use as you go, on a monthly basis. Base services are $20 per month. With that you get unlimited talk and text. Then, you pay $10/GB.

You do pre-pay. In the below example, if you think you’ll use 2GB in a month, you’d pay $40 up-front. If you use less, Google carries forward a credit. If you use more, you square up. Simple as that.

Imagine a future… where we could all read our monthly cell bills without requiring the services of an attorney.

Imagine no more, friend. In my early testing of Fi, I’ve discovered that checking my data usage is straightforward. Google has done a nice job of simplifying the dashboard. Go to fi.google.com and you’ll see something like this: 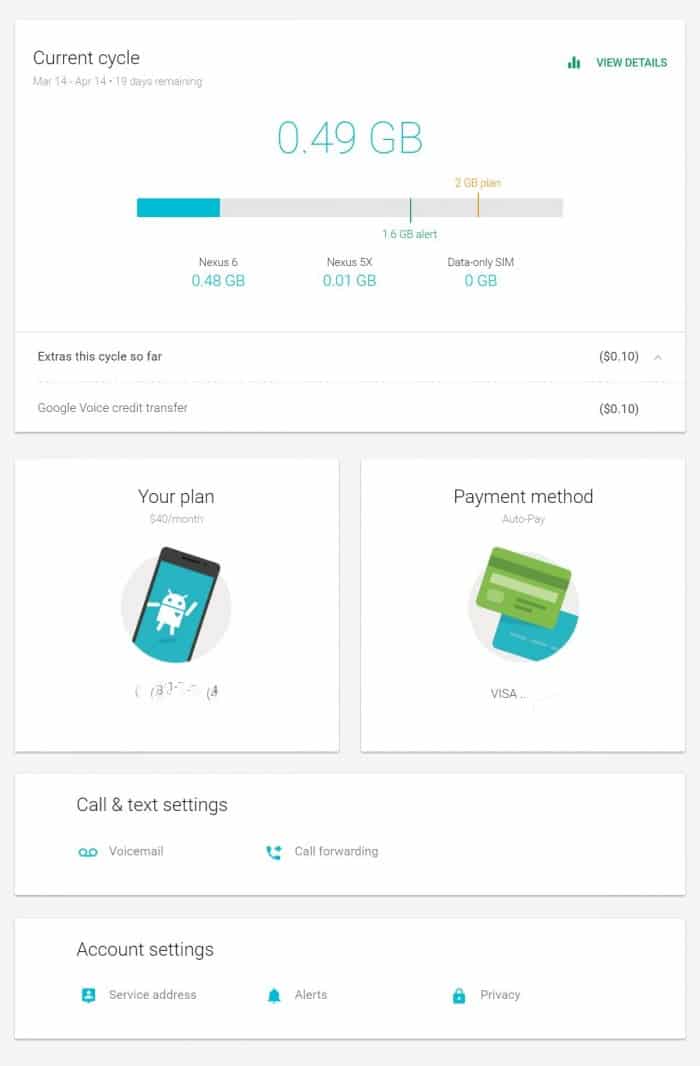 Project Fi is not a Google-made cellular network. Fi is something known as a virtual network. Technically Google (Alphabet) in this case is known as a Mobile Virtual Network Operator (MVNO). Fi is owned by Google, but actually utilizes towers from two physical networks: T-Mobile and Sprint. In addition — thanks to a dash of that out-of-the-box Googlethink — Fi will automatically connect your phone to available wi-fi hotspots within range (hence the name “Fi”). This all happens in the background without you having to worry about a thing.

So far my coverage here in the San Francisco Bay Area has been as good as or better than it was when I was using my T-Mobile SIM card. For instance, when I was parking my car the other day in the basement of a high-rise in downtown San Jose I was actually getting bars (granted, just one, possibly two), when before I had absolutely no service no matter how hard I tried to reach for the sky.

For a guy like me this is the bonus round. You can request data-only SIMs from the Fi web site. They cost nothing, and allow you to connect secondary devices to your Fi plan. These data-only SIMs provide just that: data only. You won’t get texts or voice. Still, for a lot of us this is no problem. I use Google Hangouts for text (data) and a lot of voice communication via apps such as Voxer (again, data only). So, in theory you could pop a data-only SIM into a spare phone or tablet you have lying around and hit the streets and you’d be pretty much fully connected.

When I ordered one for my Fi account, I received it in a few days. The packaging was nearly identical to the one you’d receive when you get your Fi starter kit. I popped the SIM into my spare Nexus 6, and it activated in short order using the code provided (see below).

I also tried a Fi SIM in an old iPhone 4 and it worked without a hitch. Google, however, officially says only the Nexus 6, Nexus 6P and Nexus 5X, and certain tablets like the iPad Air and Nexus 9 are supported for Fi. My experience suggests that you may have luck getting other Android and iOS devices to run using Fi data-only SIMs — just don’t expect any support if you run into any issues.

As you’d expect, all data-only SIMs draw from the same plan. I like that the Fi account dashboard breaks down data usage by device. Good stuff. 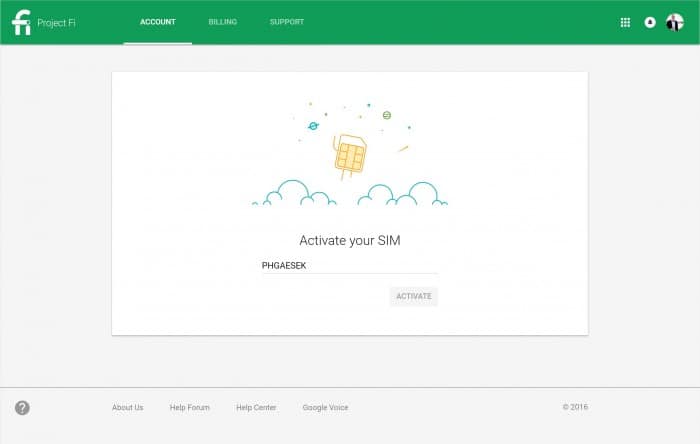 Pause or Cancel Service with 1 Tap

Ah how I miss the old days. You know the ones… a polite conversation with a customer service agent (aka sales rep) trying to explain why you’d like to politely close your cellular account. The joys of a bygone era. With Fi, if you want to cancel or pause service, just open the app and let it be so: 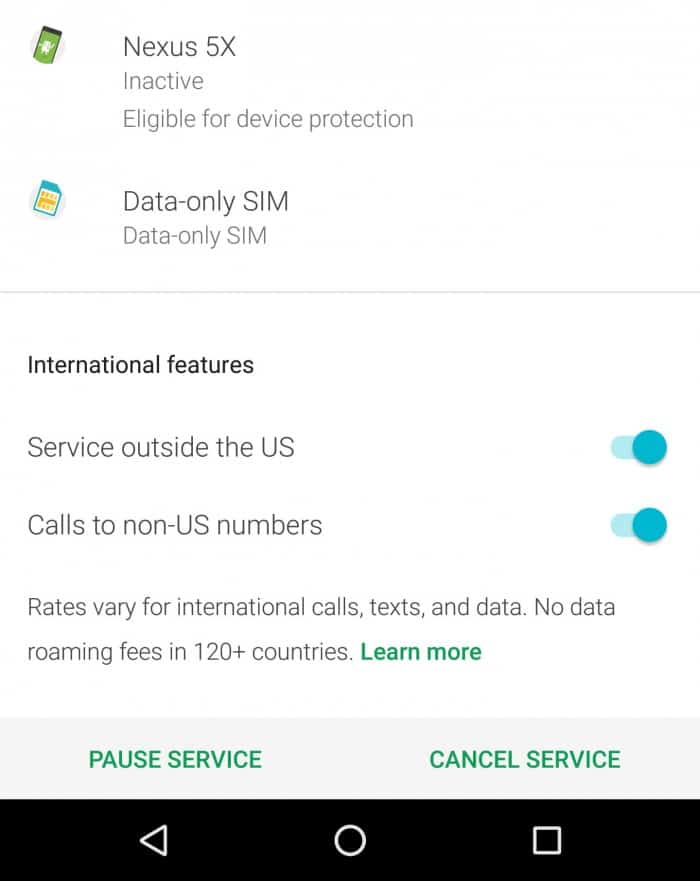 Project Fi: Worth Switching from T-Mobile?

If you consume a lot of data, you may want to stick with your T-Mobile $30 pre-paid plan. Heavy video and music streamers who rack up, say, 10GB in monthly data, will quickly find themselves facing $100+ cell bills. Keep in mind, though, if you’re near public wi-fi hotspots this could be less of an issue thanks to Fi’s auto-switching.

If you’re like me, though, and use less than 2GB data per month, you’ll pay slightly more for Fi, but benefit from: data-only SIMs for additional devices, pause/cancel at will, better coverage (at least in my case here in SF Bay Area), easy-to-read billing, and… peace of mind knowing that yet one more part of our lives is being routed via Google’s all-seeing, all-knowing eye in the sky.