“Children are made of glass. Children shatter.”

Maybe their parents do too.

On Clover Road could have been a straight-ahead story about cults we’ve seen so many times before: parent searches for runaway child, finds them in remote location under the spell of a spiritual leader, proceeds to rescue them, and then attempts the arduous task of de-programming. Yes, Steven Dietz’s thriller gives us those basic elements — and they’re intriguing enough in their own right. But this play turns convention on its head, several times over. The twists come increasingly fast, and causes us to not only re-think proceeding scenes, but to question belief systems in general. What election year?

San Francisco’s re-born Strand Theater played host to the San Francisco edition, and last leg, of the rolling world premiere. Upstairs in the 1,500 square foot “Rueff” space (which offers gorgeous views of City Hall… when the windows aren’t blacked out for a show), San Francisco Playhouse unveiled the new show to a full house.

Director (and SF Playhouse co-founder) Susi Damilano noted that the play was part of the “Sandbox Series.” Started seven years ago, the program aims to discover new playwrights, and bring otherwise underexposed works to the stage (Glickman award-winning alumn Ideation is now playing New York to raves). It seems to be the perfect partnership. After all, the vision for Carey Perloff’s Strand — aka Market Street’s Red Box — reclamation was to revitalize the arts along Central Market, and to also reinvigorate the scene with newer, non-traditional, perhaps edgier material. Later, departing out the back of the Strand into the balmy San Francisco evening I couldn’t help, but feel this play, the Sandbox Series, and the Strand as essential components to the next chapter of live theater, to the next few decades, to ones where Millennials and Gen Zers will bring their very connected, very mobile lives into buildings wherever they go.

And on this evening, that building would be an old, abandoned motel on… Clover Road. Flea ridden, unkempt, decrepit and the kind of place where a single, barely standing lamp seems to begrudge its duty. Its here that private investigator Stine (Michael Storm) meets the desperate mother (Sally Dana). Her daughter, “the girl” (Rachel Goldberg) has fallen prey to “the farm” and hasn’t been home in four years. Stine professes to know how to execute a rescue, and has seemingly dealt with cults many times before — kind of how The Wolf knew how to expertly clean a crime scene in Quentin Tarentino’s Pulp Fiction.

To go much further into the story, however, would be to reveal too much of the unexpected and entertaining twists and turns. The magic in the script is that it keeps us guessing, and, several times by my count, swiftly pulls the proverbial rug beneath us. By the time the (somewhat awkwardly paced) ending rolls around, we think we know where this thing is headed. Cult leader Harris, as they say: once a salesman, always a salesman. And if a mother-daughter can’t bring themselves to express with words, perhaps a childhood game would.

On Clover Road is a fun 80-minute ride. While some of the pacing is at times uneven, and the ending might have been too obvious, especially after all the interesting pretext, it’s exactly the kind of play that deserves to see the light of day. And we can thank San Francisco Playhouse’s Sandbox Series and the wonderful new Strand Theater for that. That post-show champagne tasted especially sweet on what feels like the beginning of a new era of theater in San Francisco. 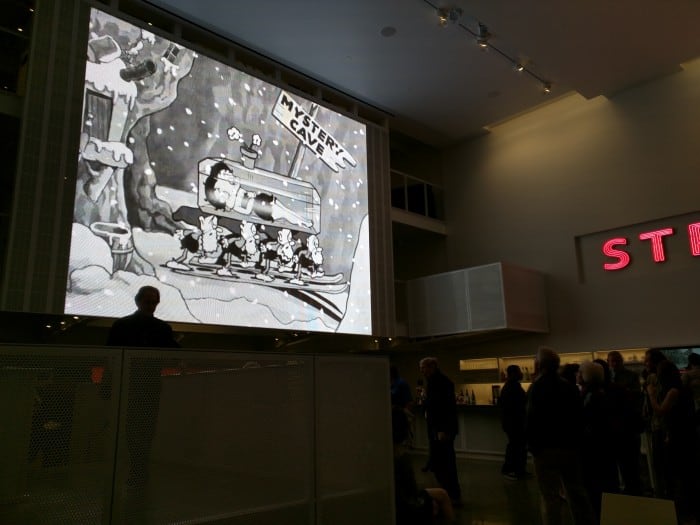