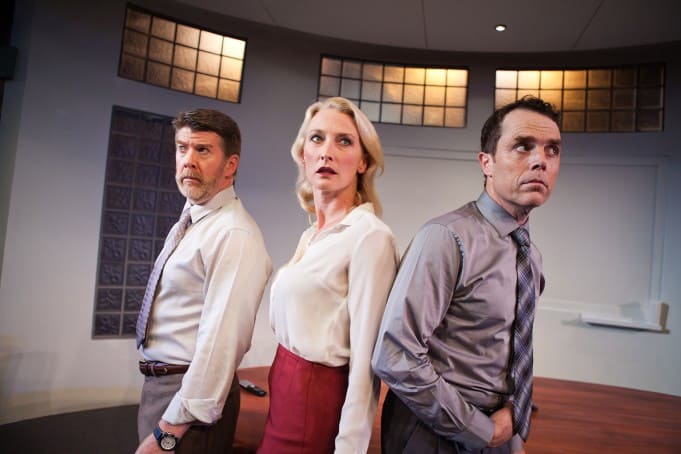 If there was any question as to the value of pumping time, money and energy into new works for the stage, the results were on glorious display over the weekend at San Francisco Playhouse. Artistic director Bill English noted that Ideation came out of the theater’s sandbox series. Now, the 90-minute psychological thrill ride finds itself premiering on the main stage, marking the opener of the Playhouse’s twelfth season.

A show set in a sterile, anonymous board room, centered on a whiteboard, and starring corporate consultants might not sound like the most entertaining way to spend a Saturday evening at the theater. But playwright Aaron Loeb has done something remarkable here. By keeping the audience as perplexed and in the dark as its protagonists, he keeps everyone on their toes, second-guessing the motivations of various relationships, the ultimate agenda at hand, and  the plausibility of each piece of information revealed.

I can’t reveal the “vision” here or even its piece parts to risk spoiling the mystery. However, the challenge confronting this team of over-analyzing consultants is one of scale. In Silicon Valley we love talking about “scale.” How to solve big problems? Big data! Probability outcomes! Out-of-the-box thinking!

Slowly an end-goal does appear to come into focus. An off-stage CEO needs ideas to tackle a big problem, and our Starbucks (and petite scone) loving ensemble has merely an hour to get it together. While they set out to initially brainstorm solutions, they begin questioning and suspecting — do individual components add up to some sort of larger conspiracy?

Part of the magic of this production is the manner in which Loeb builds tension. There is no music. No special effects. And no dramatic scene changes. Words (and lots of them), the calculation of probabilities using the whiteboard as a sixth actor, and an unsettling “trust no one” mantra lead our intrepid consultants down an increasingly slippery slope of delusion. Pragmatism is constantly at odds with might-be mental breakdowns.

Historical events play a part here (maybe), as do current events (maybe) such as ones that threaten human kind on a wide-scale like the Ebola outbreak.

Oddly, in some way, Ideation reminds me of the horror film Saw. It’s a (big) stretch to be sure. At least, though, they both have one thing in common: people in a room trying to solve a problem in an effort to please an unseen force. Bit by bit, not only do we learn more about each of the characters, but their circumstances appear to become more clear, yet less clear at the same time. Muddiness is all part of the test so it would seem.

It would be hard to imagine this play working in anything, but the most capable hands. Fortunately, this cast is absolutely stellar. These could be some of the best performances I’ve seen in recent memory. Main leads Carrie Paff, Michael Ray Wisely and Mark Anderson Phillips are at the top of their games. I’ve seen all of them perform in various theater houses in the Bay Area over the years, but Loeb’s words combined with their expert delivery, blocking and timing is nothing short of mind-blowing stuff. In particular Phillips — the ruffled consultant, streams of sweat, baffled one moment, then awkwardly attempting to control the room the next — is pure adrenaline rush.

Bill English thanked the carpenters during his opening remarks. Indeed, rightfully so. Yes, this could be just another meeting room. But, here, under his watchful eye, we get gorgeous curves (and even a curved whiteboard!), artful glass block windows, and exquisite lighting. Playhouse’s new location on the second floor of the Kensington Park Hotel is perfectly suited to this kind of material. And they’ve got the opening night vibe nailed – champagne flows, a photo booth adds to the sense of occasion, and there is not shortage of good eats.

There are times I, admittedly, loath going to see another tired theater reboot, or rehashed touring musical. Thank goodness for new works. San Francisco Playhouse is on a roll. Bauer is playing New York. And now Bill English and his team have given us a gem of a season opener in Ideation. If this is the direction of theater for the social media saturated and attention challenged masses then I’m inclined to like it. A lot.