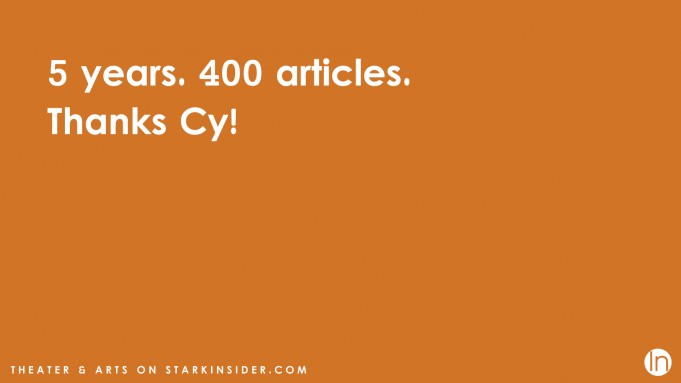 400 articles later and she’s going stronger than ever.

Earlier this month I realized that Cy Ashley Webb had hit a prolific milestone.

And I wanted to profusely thank her on behalf of myself and Loni Stark for all she’s done for Stark Insider, and, more importantly, the community.

Back in March of this year, we celebrated 5 years of her contributions here, and yet I had never shared this very important news. That’s over 400 articles of theater and arts contribution. I’ll leave it to the theater zeitgeist to assess its value to the community at large, but I wanted to take a brief moment to say Thank You, Thank You, Thank You.

How serendipitous that Cy’s first SI post, Coffee in midtown Palo Alto, would be about a place based in a town where she has spent so many years involved in children’s theater. And coffee, of course: the lifeline of any creative endeavor!

Anyone who has covered theater and arts across the San Francisco Bay Area knows that you will go through more than a few sets of Goodyears. The miles add up fast — Down to San Jose, over to Berkeley, then back up again to San Francisco, and down to Mountain View. And just about everywhere in between. There’s no shortage of amazing theater in 2015 in the Bay Area. To be but a bit part of it all? A thrill and a half.

Our job here is to celebrate the artists who enrich our lives by bringing thought-provoking, entertaining, whimsical works to life. For that, we are privileged to be a witness. Yes, we review shows. But it should never mean we sit, arms crossed, with an imaginary wall between critic and performer (as entertaining such a scenario could be, see Birdman).

I’m so pleased that Cy has raised the bar here, and contributed so “tire”-lessly. When a Cy review is submitted to SI, two things usually happen: I tremble slightly when reading it, knowing that she’s far and away more than what we deserve here on this site; and then I turn to to Loni Stark and ask, “How does she do it?!”