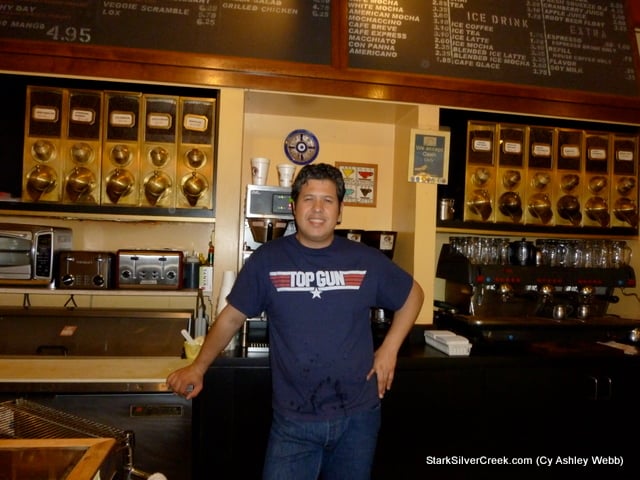 Midtown Palo Alto could easily surpass Seattle as the Mecca for coffee drinkers, with three independent cafes, all with free Internet access, less than a block from each other.  However, each brings an independent personality – and meets a different need.   Unlike big-chain store coffee shops, the owner of each of these establishments can usually be found serving customers.  Being local, they all know the importance of having a relationship with the customers – and the importance of good coffee!

Palo Alto Café is the granddaddy of the lot.  With lots of seating, including ample couches, it has been a neighborhood fixture for decades.   It’s the perfect place for evening meetings because their hard 9:00 PM closing time focuses discussions that would otherwise tend to wander.   The only off-note is the acoustics.  Unless it’s one of the rare moments when the shop is not teeming with customers, I feel swathed in the sound of everyone’s conversations – which can be a little jarring first thing in the morning.   Palo Alto Cafe  is one of the few places that’s open on Christmas morning – and there’s a predictable crowd of repeat customers every December 25th.

Directly across the street from Palo Alto Café is Café Sophia. Sophia is the unrivaled queen of the mid-town coffee scene, having managed Crème de Café, before starting her own establishment.  Unlike all the other coffee places in the area, what makes Sophia’s different is, well, Sophia.  Her warmth (and indeed, the warmth of her husband Dwayne and her son Ali) is only equaled by the intensity of her coffee. 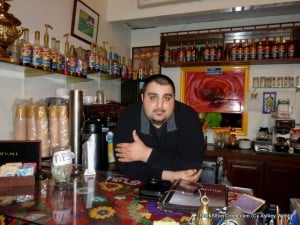 Unlike Palo Alto Café, Café Sophia is a little more restrained.  While Café Sophia is perfectly casual, I’d never show up in my pajamas – or accompanied by someone who might get a wee bit too emotional – both of which would be unremarkable at Palo Alto Café (and no, I don’t go out for coffee in my jammies).   Some of us remember Sophia from her old location at Charleston Plaza where her customers were a wonderful eclectic mix of the dot-com crowd, folks from the assisted living facility across the street, and locals.  When she was forced out of the location, her loss was so keenly felt that I learned to make my own espresso and make my own scones (which still don’t hold a candle to Sophia’s current scones!).  Her new incarnation is as a coffee shop and Afghani restaurant.  Unlike Palo Alto Café, Sophia’s is quiet – and is a great place for important meetings, intense conversations– and yes – the cardamon is still on the counter and her current scones are still tops.

Just down the street on the corner of Loma Verde and Middlefield is Philz.  I first stumbled on Philz when they were remodeling the old Crème de Café.  Even though Philz wasn’t open, Phil welcomed my son and I, made us a coffee – and more importantly, made us feel at home.  Philz is an entirely different coffee experience as staff brew individual cups from a huge selection of different coffees.  Indeed, Philz is the only place I have ever been able to order a cup of real Jamaica Blue Mountain.   Philz tends to cater to twenty-something musicians, students and artists. That being said, this is where I buy my coffee beans – as I can always count on well-informed staff to make excellent suggestions.

Palo Alto Cafe is at 2675 Middlefield Rd.  Cafe Sophia is across the street at 2706 Middlefield.  Philz is one block south at 3191 Middlefield.  This area is truly a coffee-lover’s dream.