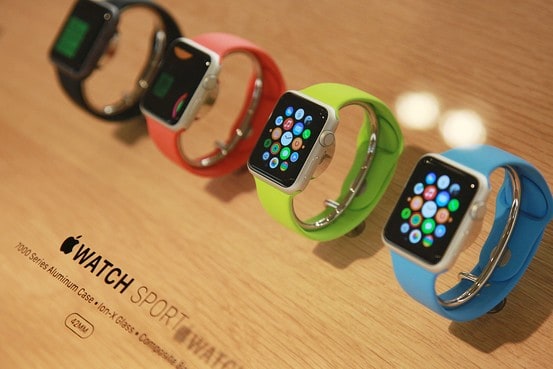 I peered into my crystal ball this morning and:

I saw long (very long) line-ups at Apple stores. The month was April. The year 2015. And, once again, the Apple faithful were lining up around the block, heads down and texting on their iPhones, while dutifully waiting to buy its ultimate companion, the …

Will this vision come true? Can Apple do what no other manufacturer has been able to do so far, and make a hit wearable, an actual here-and-now, even lust worthy wearable? Will the Apple Watch be a Smash or Trash?

I asked some Facebook friends, and received a slightly positive response. Many suggested that because this is the “it” company, merely having the Apple logo on the watch guarantees at least a certain amount of success. Others noted that wearables did not yet have established value – why carry yet another device (one that needs a daily charge no less) when your smartphone (iPhone or otherwise) is merely within quick reach?

All fair points. Then there’s the tepid response of the market to Android Wear devices. So far watches like the Moto 360, LG G Watch, and Asus ZenWatch have been mere window dressing for the Google Play Store. Even with low prices (the ZenWatch sells for a reasonable $199), Android Wear has not spoken to the masses as effectively as it has for the early adopters. Even the Pebble Smartwatch (which I love and wear daily), the early category leader, has sold only 1 million units over its two year of availability.

The Apple Watch will be the first new “i” product range introduced since 2010. Five years ago the iPad took the world by storm, carved out an entirely new market, and did so with astonishing ease. When it comes to busting open product categories, there’s everyone else, and then there’s Apple. This is a company that has done time and time again.

So then, with that, here’s 5 reasons why–despite my skepticism for the overall wearables market–I believe the Apple Watch will be a Smash.

5 Reasons Why the Apple Watch Will Be a Smash

Apple gets that something we wear should be fashionable. A smartwatch needn’t look like a tech 101 beta product. Forget about bulky plastic, unrefined curves, and kludgy charging cradles. Apple appears to our sense of style. Remember the first iMac? First iPhone? And even the first iPod? All looked, as some are wont to say, the biz. In recent years Apple hired some hotshot designers with backgrounds in fashion and luxury retail, people like Marc Newson (Ikepod), Angela Ahrendts (Burberry), and Paul Deneve (Yves Saint Laurent). Have you seen Google Glass? It’s hard to imagine Apple making that same mistake with a roster of tier one designers on its team.

Reports indicate that more hospitals are trying Apple Healthkit than they are Google Fit. If true, and if this points the way to future adoption, this is a big deal. We all know the health industry is huge, with profit margins for suppliers to match. One recent downside: rumors this week suggest Apple has ditched the health-monitoring features. But that may be a short-term blip, in an otherwise long-term game to win the platform game in a massive industry that could generate exponential returns.

3. Every Tesla Owner Will Want One

Sure there are only about 50,000 Model S sedans on the road. But being able to control your Tesla with your brand new, lust-inducing Apple Watch will pretty much ensure 50,000 unit sales right off the bat. Not only that, these early Apple Watch sales will fall into the hands of people who will know doubt give demos to every and anyone within ear shot: at family get-togethers, in the middle of a meeting at work, and to random passerbys in the middle of Stanford Shopping Center. Tesla owners will be the ultimate–for better or worse–promotional spinsters for the Apple Watch.

4. My Wife Wants One

My wife wants an Apple Watch. And she’s a laggard. Only recently did Loni upgrade her iPhone 4S to a new one. She never wants a new tech anything. That she’s expressing interesting in Apple Watch must mean something… if not just to me, perhaps to the market writ large!

And that, folks, is all there is to say about this one.

Apple Watch. Expect it to be a smash.

Whether the wearable will have the ongoing sales success of the iPad, which saw sales growth over the first four years from its introduction, remains to be seen. Given that some analysts are predicting the Apple Watch to move 20 million units this year, representing about 20% of total iPhone sales, suggests that investors will just as eagerly welcome this new revenue stream with open arms, as will tech laggards such as my wife, and the masses that have been waiting for a wearable that actually looks the fashionable part.