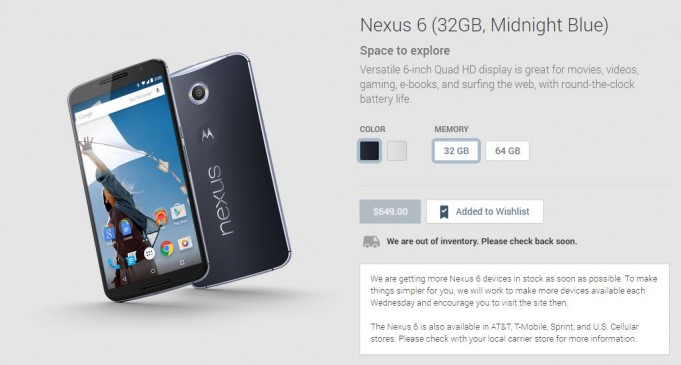 We are out of inventory. Please check back soon.

Visit the Play Store and try to order a brand spanking new (and wells-spec’d) Nexus 6, and, you’ll be greeted by an out of stock message. Same, too, if you attempt to order a Christmas gift such as the Nexus 5 (mediocre). Ditto the LG G Watch R (thumbs up).

For us Android fans, this is nothing new of course.

Last year similar stock outs greeted those of us looking to upgrade to the then new Nexus 5.

It can be frustrating. Google spends large amounts launching and then marketing new flagship devices. The market gets frothy with anticipation. And, being the holiday season and all, there are many eager to place an order. Yet, it’s impossible to do so. Sure, from time to time, stock does appear. To snag an item, though, you need to watch the Play site, and Twitter, like a hawk – forget about quiet evenings with the family, picking the kids up from school, and walking the dog… it’s all about F5, F5, F5 (or: command + R, command + R, command + R).

So, yes, we’re excited about the new Nexus 6 (though, with that 6-inch gonzo of a screen, slightly worried about it fitting in our pockets). But, no, we can’t have one. And Google won’t even tell us when we can have one.  There are no time estimates for new stock. You can’t put a deposit down on one, or pre-order, or do anything that would — gasp — give Google our money. $640 (32GB) or $699 (64GB) to be exact. Apparently, based on the demand and stock outs, plenty of folks have no issue paying $300 more than last year’s model for an unlocked device.

Interestingly, whereas Google won’t take our money or provide inventory estimates, Apple will.

Apple says, “No we don’t have an iPhone 6 Plus in stock. Still, give us your order. We’ll ship it when it arrives. We expect that to happen in 1 – 2 weeks. Thank you. Have a nice day. You may now walk away from the browser.”

But the point is with Apple I need only visit their site one time. I place my order. And my business is done. It’s a far better approach in my view, and shows appreciation for the customer’s time – quite unlike us Pavlovians clicking insanely over and over on the Google Nexus 6 product page.

I suspect the different approach points to a bigger underlying advantage:

Apple has the better logistics.

Often controversial (Foxconn), Apple’s supply chain has become the stuff of legend. Needless to say, this is a company that knows volumes about hyping up a new product, creating unfathomable lust (with sure-fire lines at the local Apple Store), and then — this is key — cashing in on the hoopla. They do it again and again.

Meantime, I’ve capitulated. As much as I want a Nexus 6, I’m not a fan of playing cat-and-mouse for another few weeks, or possibly months. Instead I bought a lowly Sony T2 Ultra (also with 6-inch screen). It was only $240. Unlocked. Quite a deal- yes, far short of the Nexus 6 specs. But at least I can dump my buggy Nexus 5, get a new Android in hand, use it, wait for the Nexus 6 to come back in stock, and ultimately for the price to fall. I’m not so keen on this laptop-like pricing models for smartphones these days, though I understand the rationale – mobile lifestyles are where it’s at, and pricing models are now value-based, not cost-based. We value the functionality in our pockets and pursues more than anything else – so goes the pricing.

Google has made massive strides since I started following their Android initiative in 2009 (Droid Does!). In particular the Play Store is vastly improved – it no longer feels like walking through a bad neighborhood. Same with Google’s customer service. It practically didn’t exist four years ago. Now getting an agent via chat is fast, and effective. I had to get 2 replacements under warranty for my Nexus 5, and also one for my Nexus 4. All without a hitch. Yes, I was thrilled when Google revealed Motorola as its new Nexus smartphone partner. LG Who?

It will be interesting to see if Google evolves its ordering model.

Will we eventually be able to do what Apple allows, and place an order, and then receive the device when in stock?