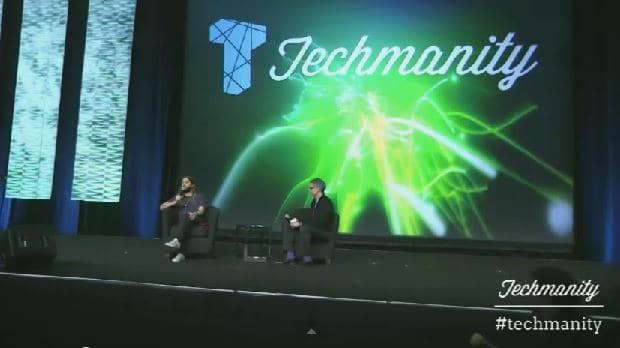 The inaugural Techmanity conference kicked off here in Silicon Valley yesterday. Video of day 1 is now available on YouTube (and embedded below).

Speakers, which are featured in the live stream captured from the San Jose Convention Center, include: actor/musician Jared Leto (who appears to be making a more of a push into tech), venture capitalist Tim Draper (Draper Fisher Jurvetson), HandUp’s Rose Broom, VC Catherine Hoke (Defy Ventures), and Eric Hilton and Rob Garza who held a timely and interesting discussion on the changing landscape that is the music industry.

Jared Leto was clearly the marquee personality for the event. It was a good choice. Given his range of abilities and successes–music (Thirty Seconds to Mars), acting (Oscar winner for Dallas Buyers Club), tech investing (early round investment in HR automation startup Zenefits and others including Hive and concert streaming service VyRT)–he’s able to cross a gamut of compelling topics. Most notably, Leto, as he’s wont to do, criticized the music business again (and for those who missed it, you should check out his band’s fight against a record label lawsuit in the eye opening documentary Artifact). Though he noted they’re not necessarily the problem, a service such as Spotify (among others), pay out “eembarrassing royalties/licensing fees to artists.

As in other conferences we’ve seen in recent years in San Jose and across the valley, there is a strong music component – the idea of mashing up arts, tech and creativity. Performers scheduled today include Weezer, Kongos, and Young Rising Sons.

And it wouldn’t be a respectable tech conference of course without a strong focus on start-ups.

The “Startlandia” exhibit takes place in the ballroom, and has a juicy roster of young companies to watch including Buddy Watch, Lend Layer, Moxtra and Transcense, among scores of others.