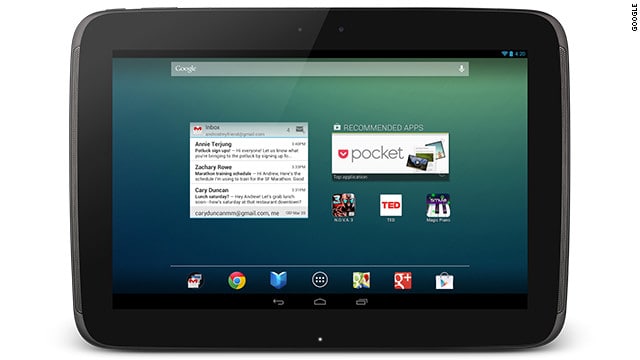 This morning the Wall Street Journal reported some very interesting news for us Android fans. If true, Q4 could be a real doozie for the tablet and mobile markets.

According to Eva Dou at WSJ, HTC will make the next Nexus tablet. Better still it will come in at 9-inches (“people familiar with the matter said”). The possibly scary part: expect it to land Halloween 2014 – surely something Apple would never attempt (or would they?! Read on).

Google’s Nexus program has, of course, already dabbled, somewhat modestly, in the tablet market. As of today on the Play Store, the Nexus 7 (Asus) and Nexus 10 (Samsung) continue to anchor tablet offerings available direct from Google. Though the Nexus 7 has received generally favorable reviews (both the original and the current second-gen), from what I’ve heard sales have been less than impressive. Part of that I’m convinced has to do with the “Nexus” moniker itself. Too techy. It doesn’t resonate with the masses, especially those who might (and do) otherwise plunk done $500+ on an iPad.

SAMSUNG + GOOGLE = Fire in the hole

Then there’s that thorny issue with Samsung. Google, oddly, chose their competitor a few years back when they looked for a partner to build a 10-inch tablet. Lawsuits, ego and anger, and things like that soured the deal in short order. Arch nemesises then: how much effort do you think Samsung put into marketing the Nexus 10 tablet?

Nexus 10, while decently spec’d and a pretty enough bit of kit, really never took off.

Meanwhile HTC has been nailing it. Well, let’s be clear… nailing hardware design. Certainly not financial performance. Handsets made by HTC have been some of the most highly rated Androids over the last few years. Thanks to anodized aluminums, and other premium materials the HTC One and its follow-up, the One M8 which was launched earlier this year, rival (and perhaps even surpass?) even the best from Apple. And because of the Taiwanese company’s aforementioned liquidity woes could this be a golden tablet partnership? Google needs a hit, and has financial might. HTC needs money, and has design chops.

HALLOWEEN – Maybe Apple would do that…

Apple locked down the back-to-school market window with the highly successful iPhone 6/Watch event – the Tim Cook shot heard ’round the world. No question. The mojo was there – the sales no doubt to follow, in spades. But Apple is not done yet. An iPad (and maybe a laptop) refresh is expected “late October” which could steal some thunder from Google just as it is hoping to shake things up a little bit with friend HTC.

But, try as Apple and Google might to re-energize a saturated tablet market, there’s another hurdle: larger phones.

Credit Samsung for starting the trend. Many of us (sadly, myself included) scoffed a the notion of “phablets.” They’re just too big, I thought. Holding up a 5.5-inch+ sized device to the ear to make calls was the thing of parody. But I was wrong. People use smartphones less to make old fashioned telephone calls, and more often to surf the web, check up on social networks and take selfies. When it comes to all that, bigger is better. Want any proof just look at the runaway success known as the Galaxy Note – Samsung’s upsized smartphone. The fourthgen due this year is expected to ship with a 5.7-inch display. Fans just can’t get enough – sales of the line have wildly exceeded even Samsung’s own forecasts.

Apple entered the large phone category too, following in Samsung’s footsteps by a few years. The iPhone 6 Plus features a 5.5-inch screen. That’s still pocketable (relatively) and yet big enough to make someone think twice about opening up their laptop or taking their tablet out of the drawer – why bother when you can get stuff done on your phone?

Ultimately, the largest competitor Google and Apple (and Amazon) may face while trying to stoke another round of tablet sales is that they partly created: larger phones.

Earlier this year the odds were Google would release a Nexus 8 tablet (8-inch). But I suspect the strategy changed mid-cycle. Market research likely suggested that consumers would be willing to reach for their tablet if it offered a significant benefit over the phone in their pocket. If that magic number is a screen size delta of, say, 3-4-inches, then that would put the ideal tablet size around… 9-inches. That was a smart call. Choosing HTC as a partner, albeit risky, was an inspired call.