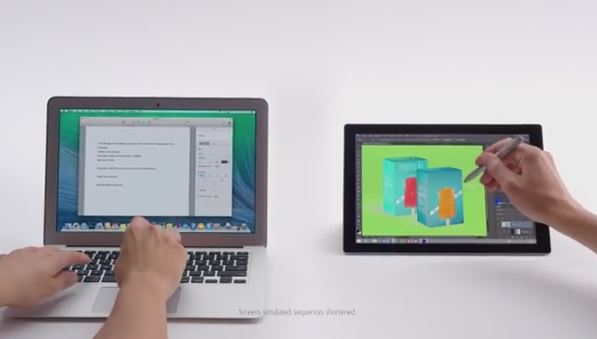 Microsoft has a new 30-second spot for the Surface 3 tablet. If you love the mid-2000s version of Microsoft, chances are you’ll love this ad.

Most of us, though, will likely yawn or shrug. Or maybe both. I wouldn’t be surprised if some even cringe. Here, have a look at the Surface 3 vs MacBook Air video:

Granted, mano-a-mano ads are nothing new of course. Politicians have mastered the genre, bashing each other silly. Yet doesn’t it just make us all feel a bit dirty?

I much prefer ads that inspire, and demonstrate what can be. I also believe them to be more effective (I’d be interested to see some data on that, it must be out there somewhere). After all, a purchase decision for a tablet/laptop that costs in excess of $1,000 is likely motivated as much by need and practicality as it is by want and emotion. Pushing the emotional button and instilling lust usually requires more than just a head-to-head specs throwdown.

Then there’s the Surface tablet itself.

I have one. A slightly chunky, but very well made, firstgen model. I wouldn’t say I’m a fan of Windows 8.1, though I do find it runs fast and smooth on my office desktop. Metro has its charm (and a soon disappearing charms bar) that reveals itself with time and practice. Internet Explorer, for instance, on the Surface is a speed demon, easily trumps iPad in my tests.

At the end of the day, however, I agree with those who accuse the Surface of being a jack-of-all-trades, and a master of none.

As a laptop the Surface is very inconvenient. It’s near impossible to use on a lap. Even the new one with its (clever and well engineered) kickstand devolves into a clumsy balancing affair. The trick keyboard is nice. Still, give me the one on the Mac every single time. Take a step back, and you realize–perhaps pedantic I admit–something strange. By taking piece parts such a separate screen and a separate keyboard, Microsoft is trying to re-invent the laptop by slowly evolving from a clumsy design to one that will likely look more and more over time like… a MacBook (or other standard laptop with a hinge and fixed keyboard).

As a tablet, the Surface is quite big, but also quite capable. Lack of apps is still an issue, though much ground has been closed in the last 18 months in the Microsoft Store.

To be fair, Microsoft has done what a good marketing campaign should do: it has people talking. Now, will they buy?

Many have noted that Microsoft should have pitted the Surface 3 against the iPad Air in this ad; not the MacBook Air.

Then again, the value proposition here is that the Surface replaces both a tablet and a laptop.

Yes, it does, or it could. Problem is, it doesn’t do neither as well as a purpose-built device. That’s why Apple is winning this round, positive and inspirational ads and all.