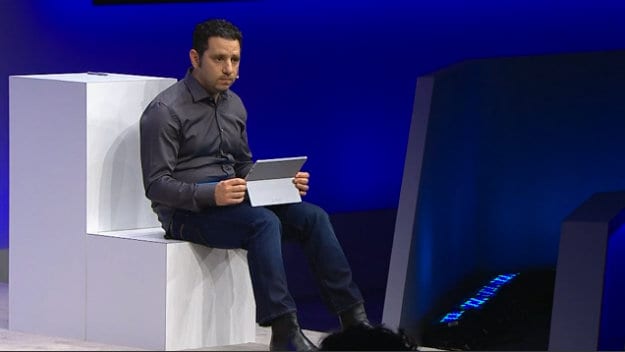 Running for the front door and not sure which device to bring with you, a portable long-running tablet, or a more powerful big screen laptop?

Microsoft has an answer. It’s called the Surface Pro 3 (starting at $799). Featuring a 12-inch screen, the company is positioning the third iteration of its struggling hybrid a the ultimate laptop and tablet replacement.

“This is the tablet that can replace your laptop.”

Today in New York the head of the Surface team Panos Panay walked press through the Surface Pro 3, continually emphasizing key engineering points; such as the updated kickstand which now rotates almost full 180-degrees (the original Surface kickstand had only one position, and the sequel had two) giving users more freedom to set the Surface on a bed, a desk, or, as Panay demonstrated, a lap.

Buyers have complained that the screen size of only 10.6-inches was too small on previous models. Bumping that up a few inches gives Microsoft the ability to target users who might otherwise have purchased a regular clamshell laptop.

I haven’t had hands on with the Surface Pro 3 yet. Having owned a Surface Pro for a few years I’ve been impressed with Microsoft’ vision of the laptop/tablet combo. There are downsides. The original’s battery life was horrendous. The screen mediocre. And type covers (especially the trackpad) that couldn’t provide nearly as good as typing experience as you’d find on even a $249 Chromebook. On the surface it looks as though Microsoft has corrected all those issues.

Also, the Surface Pro 3 actually looks sexy. It’s thin (9.1 mm), has a much trimmer bezel than years past, and has a bright, high resolution display (2160 x 1440) that makes multitasking a breeze (I love Windows 8.1 split screen capability on the Surface, it, as they say, works a treat).

Still, one stumbling point for me is that kickstand. It’s cleverly engineered, and works great. But, it’s still looks like it won’t offer the same stability and convenience (“lapability” in the words of Microsoft) afforded by traditional laptops – those that employ the clamshell design that has proven its worth for decades. There’s a reason for that. It works! I think this is still a key hurdle. Why would I want a type cover, and a kickstand to replicate a laptop design when I could just go for the real deal, say, something like a MacBook Air?

Some saying Microsoft will only reveal larger Surface tablet tomorrow. Would be shocked if true. 8-inch is where action is. #surfacemini

I Tweeted yesterday that I’d be shocked if Microsoft didn’t introduce a smaller Surface. With the iPad Mini doing brisk business it’s clear the 8-inch screen size is a sweet spot; it offers portability, is easy to hold, and makes for a comfortable reading experience.

Or, more likely Microsoft knows that its partners–Dell, Asus, Toshiba–will continue to license Windows and manufacture a variety of models and sizes (i.e. the Dell Venue Pro).

As for the Microsoft presentation this morning?

It was decidedly low key. Instead of comedy routines, loud music, and special effects, it felt like being in a classroom, getting a lesson in Surface. A personal lesson. At times Panay would feature his daughter, falling asleep while watching Netflix on a Surface. He admitted that he and his wife were probably not going to be up for any parents of the year awards anytime soon.

Is the Surface Pro 3 enough?

Consumer sentiment is generally negative when it comes to Surface – ask a random person on the street if they’d rather have an iPad Air or Surface Pro and you can guess the majority response. And, don’t forget investors are none to pleased. Last year, Microsoft took a $900 million write down on unsold Surface product. if the third time’s not the charm, I would expect the Surface brand name to be retired. If consumers buy into Microsoft’s vision of the 21st century laptop, that might not come to fruition. For now, overcoming the dominance of Apple’s iOS (33% tablet share Q1 2014), not to mention the plethora of MacBook Airs seen today at the presentation, and the juggernaut that is Google’s Android platform (63%), will no doubt be a tall order. Niche thinking–as we’re seeing with the company’s emphasis on Surface’s handwriting capabilities–may be the right approach.