Microsoft has a fragmentation issue with its apps strategy. A thorn in the side of developers, apps either need to be developed for Windows (desktop) or Windows Phone (mobile). Since the code bases are markedly different, it costs extra time and money to port an app from one store to the other – many don’t bother leading to fewer apps compared to the competition.

Worse still, to find the respective apps, users must navigate completely different stores. Apple, by comparison, has a single app store, on iTunes. Google, too, has the Play Store, but also has a browser based store for its Chrome apps. 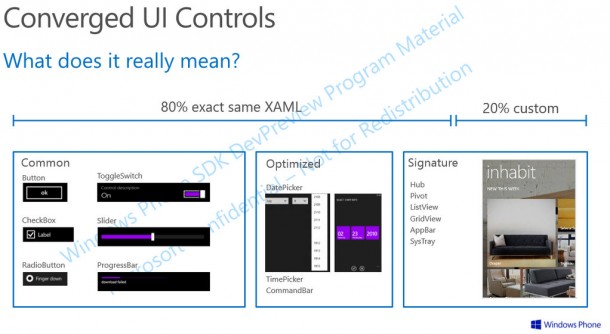 Leaked shots via Twitter, and as reported by CNET, suggest that Microsoft wants to change that.

New “converged UI” controls, for instance would use 80% of the same code base (XAML) across both Windows and Windows Phone. Net-net: less effort required to build apps for both platforms.

Microsoft will likely release the details in April at Build (San Francisco), along with the widely expected Windows 8.1 “Update 1” release.

One of the biggest challenges the Redmond giant faces is a deficit in quality apps. Though Microsoft has made strides in the last twelve months, with high profile additions such as Instagram and Flipboard, if a desirable app is not available for Windows Phone 8, users typically bolt for Android or iOS.

Word is that among several strategies being explored by new CEO Satya Nadella is the possibility of supporting Android apps. Let’s hope that doesn’t come to fruition. A key differentation with Windows and WP8 is the a unique user experience, with beautifully designed apps (Bing apps on Metro are particularly effective).

Instead, I’d like to see Microsoft continue to unify its platforms. RT was a failure. It should be killed (and appears pretty much already dead). And like Apple, the company would do well to have the same platform for both its phones and tablets. These leaked images appear to support that Microsoft is pursing that goal.