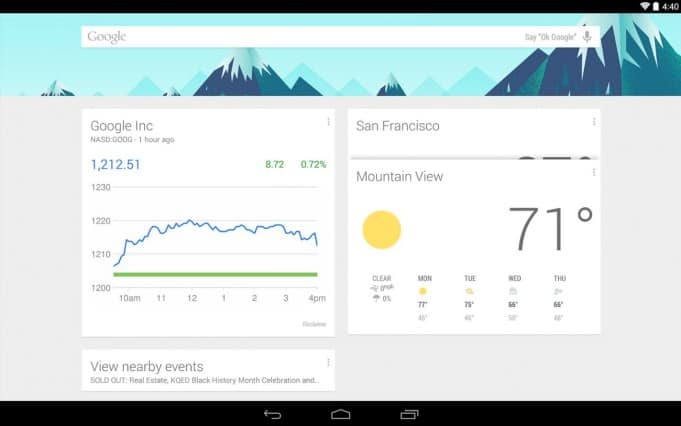 Good news for those that have a hankering for those extra bits of Google Now functionality, but don’t yet have a Nexus 5. Google has made all the goodies found in Android KitKat (4.4.2) and the Nexus 5 available as a standalone app. Called Google Now Launcher, it can be downloaded from the Play Store as of right this very second.

The new app won’t run on every Android handset. You’ll need a phone running Android KitKat or a Google Play Edition Phone such as the (awesome) HTC One or Samsung Galaxy S4. Quick bit of advice: look for a used (or refurb) Nexus 4 if you want a good handset for a bargain price, capable of running it.

Once installed the app will give you a couple of handy features.

First–and my favorite–is the ability to swipe to the right from the home screen to pull up Google Now. From there you can view all those useful cards, such as ones with the latest stock prices, traffic updates, recommended articles, places of interest nearby and on and on. Once you get used to these cards, it’s hard to use any home replacement app (if you want a change of pace check out the Aviate home replacement, a company/app now owned by Yahoo).

Also, your phone will now recognize the ubiquitous “Ok Google” voice command. I use it all the time, primarily for navigation. “Ok Google. Navigate to the Lincoln Theatre in Napa.” Voice recognition has come a long way, and I find that it almost always gets it exactly right when converting my voice into text.

As a bonus, Google Now Launcher also comes with some new wallpapers (most of which are colorful and quite pleasing, at least to these eyes), a new app drawer (which I also really like on the Nexus 5) and a transparent status bar (another welcome. if minor, addition/tweak).

Google continues to leverage its investment in Google Now. We’re seeing the card-based interface appear in Chrome for certain Google searches (such as stock price, weather, traffic). And soon, if the rumor is true, we will see it form the basis of a Google smartwatch (bring it!) that will heavily leverage voice recognition. A Google watch (reportedly to be made by LG) could be the one to really break open the smartwatch market; though, I have to say, I’m pretty smitten by the geek chic that Pebble affords this Silicon Valley nerd.

NOTE: Early adopters and advanced users, sideloading Google Play Launcher looks like a possibility, search around for the how-to’s.