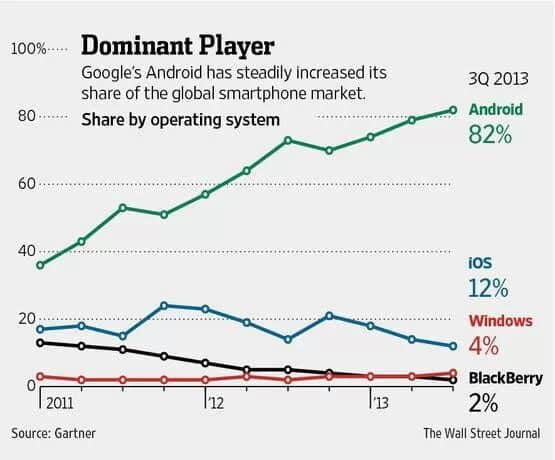 Is Apple and its once darling iOS mobile operating system really in trouble?

If a picture is worth a thousand words then I’m not going to need to write much today. This chart below ran with the story about Nokia releasing and Android phone. Incidentally, Android and Microsoft is about as bad an idea as I can imagine. New CEO Satya Nadella needs to get this company under control. A good start: Get Windows 9 “Threshold” out the door as soon as possible (even though Windows 8.1 is actually very good – it’s public perception that counts), kill Windows RT, sell off Xbox.

“Dominant Player” indeed. Here’s the chart that ran with the Nokia story – based on data from Silicon Valley’s most loved and hated analyst firm Gartner. It’s as striking a visual as you’ll find. In the words of Howard Cosell, look it here at this graphic ladies and gentleman:

BlackBerry languishes at 2% and has seen steady declines – not much to believe that will change given BlackBerry’s renewed focus on the enterprise (a good move).

Microsoft for its part is holding strong, even if that means a distant third (hey, it’s worth a Bronze!) at only 4% share. With solid, well-priced Windows 8 tablets flooding the market and garnering favorable reviews (Dell Venue 8 Pro, Lenovo Miix 2, Microsoft Surface 2) expect that number to rise over the years. Possibly dramatically. With a new CEO, and a new version of Windows set for 2015 Microsoft is a wild card. Don’t count them out. Not by a long shot.

That leaves our good friend Apple.

No. But you’ve got to wonder if there’s another hit in them. They’ve got a lot of cash, have lot of bright people working for them, and yet there’s this feeling there a few years away from becoming a Vegas lounge act. I could’ve been a contender!

Note the Q4 bounce. That’s from the renewed interest in Apple products each time there’s a new release, typically spurred by the iPhone.

I think we’ll still see lineups (and stock outs) when the iPhone 6 hits later this year. Yes, I’m sure it will be sexy, desirable. Apple, though, doesn’t need lineups. It needs a new growth engine.