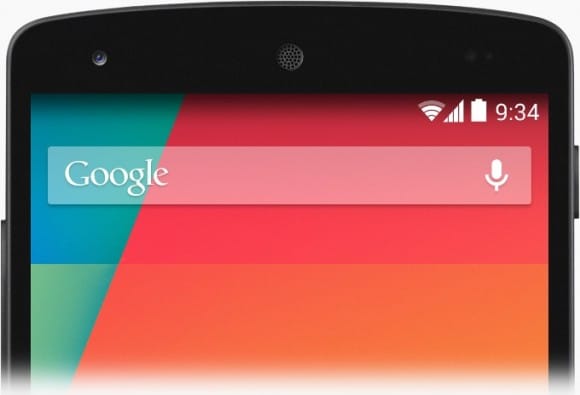 Thank goodness for that; and that was might first reaction to the new, beastly Google flagship Nexus 5.

LG might, after all, have an inkling of common sense and design smarts. It wasn’t that the glass on the back of the Nexus 4 was bad. Quite the opposite really. It sparkled, and looked cool. Problem was that it wasn’t the most durable material to choose. So with the next iteration, now available via the Google Play Store, LG saw fit to make a flagship smartphone that can rightfully take the punishment of our everyday use. Sure, plastics don’t necessarily look as sexy, but in my book they make more sense. When (and it’s not if, it’s when) I drop my phone, oh, four feet or so onto the ground, I prefer that it bounce a bit–like George Foreman–rather than shatter and crack like so many organic eggs.

I had a chance to play with the Nexus 5. My order was in almost right away. Sadly, not fast enough to get dibs on one from the first truckloads. 3-4 weeks is the current estimate. Meantime, I’m very pleased with what LG has done with the Nexus 5.

KitKat is just the right amount of spit and polish Android needed.

Holding a phone for the first time is that moment of truth. It can be a near-religious experience (for some), or just a good excuse to say, “Niiiiiiice!” (for me). Nexus 5 has all the right vibes. Yes, at about 2.7 inches wide, this is going to be tough for some users with smaller hands to grasp confidently. I’ve got average sized hands, and the Nexus 5 feels oh-so-good. I particularly like some of the subtle curves (rear and sides) and the aforementioned plastic on the backside conspire to create a comfortable feeling without going avante garde with the design. Some say the new Nexus looks boring. Another Android rectangle. Okay fair enough. This is not an HTC One (gorgeous). Still, the first thing I do with a new phone: put on a protective cover… the looks, no longer a concern, for better or worse.

It’s worth pointing out that even though the Nexus 5 has a larger screen than its predecessor, LG managed to make it slightly lighter. And because its in a larger body overall, the weight can be distributed over larger surface space. The end result is a phone that feels deceptively feather-like. I’ve got to hand it to LG. They got the design of the Nexus 5 right.

It takes only a few seconds–milliseconds rather–to realize this is a Ferrari F12… or, better yet, a Lambo Aventador, when it comes to performance. Blazes! Don’t worry about stuttering, herky-jerkies, or load times. Ha, ha, ha. That would be so 2009, and so Donut (Android 1.6) and so Motorola Droid. Fun memories. But just that: memories.

There’s one exception to performance bliss. Chrome. For some odd reason Google can’t get its act together with the mobile version of the best browser on the planet. It generally rears its ugly stuttering head when scrolling on large/long web page. It’s inexcusable really–I hope Google sorts that soon. Regardless Chrome, mobile and desktop, are my defaults.

I’ll say this upfront. I’m going to miss the cool blue color used in the notification bar. Google has (gasp) followed in the steps of Apple here and gone with grays/whites for things like wi-fi strength, battery life and the clock. I’m guessing the thought is to keep these tiny icons from distracting. I’m also going to miss the original Roboto font. The new one is narrower. Modern, yes. But somehow I’m not sure I’m entirely in love with it’s slightly condensed feeling.

Meanwhile, KitKat is just the right amount of spit and polish Android needed. There’s nothing major, just merely a serious of nips and tucks, almost all of them for the better.

I particularly like the swipe left to access Google Now. The fact that is always listening for the “Ok, Google” command is a welcome convenience too. Full screen “immersive” mode is handy for times when you want to read without the notification bar at the top or navigation icons at the bottom distracting your task. Low power sensor batching is an attempt to increase battery life by keeping the processor in a low power state until a sizable chunk of background tasks are ready to be processed. Sort of like a new Costco cashier not opening until there are 3-5 awaiting customers. Or, something like that. Until I have more hands on time with the Nexus 5 I can’t say how the battery fares. It gets a 200 mAH boost over the Nexus 4, but has to power a bigger screen, and far more powerful processor. I’m not expecting great things when it comes to endurance.

I’d be remiss if I didn’t mention the price. Once again, the Nexus is the best deal going. For only $349 (16GB) you get a flagship device, running Google’s latest and greatest. With. No. Contract. Feel free to do a kickstand. For guys like me this valhalla. I like flipping phones/tablets/gadgets on a regular basis much to my better-half’s chagrin. Being unlocked especially helpful in feeding that habit.

It doesn’t sound too exciting to refer to a year in tech as incremental.

But that is the truth.

Microsoft refined its Surface tablets, and Windows operating system (thank you for adding back the start menu!)

And Google refined its Nexus 7 tablet, and Nexus 5 phone.

I can’t really think of any major breakthroughs in 2013. I mean major. iOS 7 was also more of the same, but without the skeuomorphism. KitKat (Android 4.4) too is a series of refinements to a formula that is working very well for Google.

Wearable computing did not happen this year. Apple did not release an iWatch (thankfully). We could see more wearable products next year, but a large part of me believes the whole concept is overblown; the fascination stoked by early adopters and exuberant tech bloggers.

Despite the lack of game changers in tech, what we have is a mature domestic smartphone market. With the iPhone and Androids such as the HTC One, Samsung S4 and, now, Google Nexus 5, us consumers are a spoiled lot. It’s only been six years since Apple kicked off the modern smartphone era with the iPhone (2007), and look how far we’ve come.