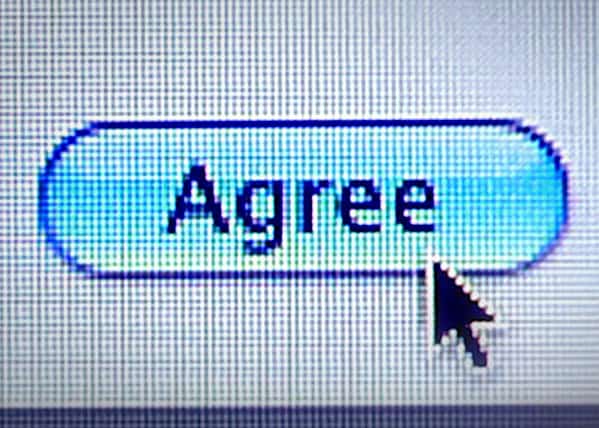 4.5 out of 5 stars - 'Right on the Money'
Directed by Cullen Hoback
Documentary
USA, 79 min.
Review by Clinton Stark

Are we all just frogs in hot water?

Director Cullen Hoback’s third (second if we’re being nit picky) documentary, Terms and Conditions May Apply, is determined to find the answer.

Privacy, of course, along with the right to publish secret information, is one of the defining issues of the modern Internet era. I wouldn’t expect for the subject, though, to make for an entertaining evening of viewing. Yet, Hoback has done exactly that; when you can make the act of clicking an “Accept” button on a web site dramatic you know your editing chops have arrived.

And because we’re talking about privacy, and what companies do with all the personal information we’re so eager to give away freely, Facebook comes, once again, to the fore. It’s the blue poster child for privacy. And founder Mark Zuckerberg its robotic, data-grabbing, ad-selling ringleader (though he acquitted himself extremely well in a lively interview yesterday in San Francisco during an interview at the TechCrunch Disrupt conference). One eye opening chart shows how Facebook’s terms and conditions have evolved over the last ten years, each successive version making more of our information–status updates, photos, videos, preferences–public by default.

Everyday all of us agree (without having read) to reams and reams of legalese when we unwittingly accept what big Internet companies–Amazon, Google, Facebook–will do with our information. Though many of these services, such as Google Search for instance, are free, there’s always a price. 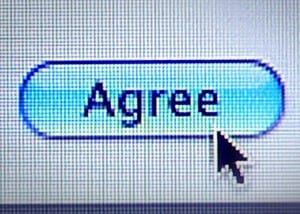 Terms and Conditions follows the standard doc formula. Unlike Friction (review and interview), the filmmaker’s sophomore effort and what a “documentary” might look like if David Lynch and Mark Burnett teamed up, this one is surprisingly easy to digest. So we have talking heads, here experts in privacy, law, technology, trying to untangle the complex topic at hand. That musician Moby makes an appearance is a bit of a curiosity.

Cullen Hoback’s interspersed narrative is highly effective. He refrains from talking down to the viewer, and avoids jack-hammering his viewpoint – though his position on the matter is evident. Interestingly, a representative from Anonymous makes an appearance, though it appears he’s more keen on presenting himself as the world’s most interesting man than adding to the discourse.

Hoback’s Michael Moore moment doesn’t quite reverberate the way we might anticipate. And that’s a good thing. A potentially confrontational scene with Mark Zuckerberg on a sidewalk outside his home ends up coming across with far more charm than it should. It earns the director credibility and likability. So when he tells us that the world would be a better place if we just switched off all the cameras, stopped recording everything, we’re inclined to smile right along, and agree.