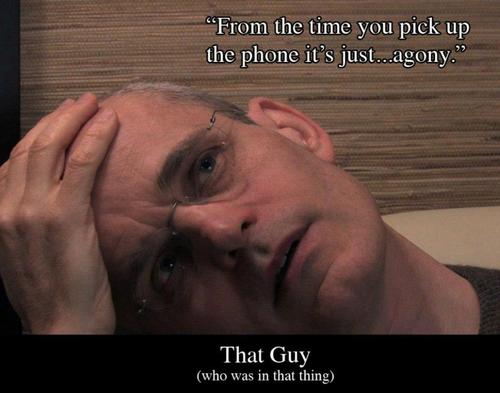 That Guy... Who Was in That Thing

Life as a character actor. You know their faces, but not their names. “They’ve played cops, lawyers, bosses, best friends, psychopaths, politicians and everything in between.” And though most of them have appeared in big-name shows (24, Seinfeld) or films (A Few Good Men) and acted in scenes with A-listers (John Travolta, Tom Cruise), their fame–and especially their salary–isn’t exactly Brad Pitt.

In the perfectly named documentary That Guy… Who Was in That Thing first time filmmakers Ian Roumain and Michael Schwartz explore, through a series of interviews with sixteen actors, the trials and tribulations of working Hollywood; which is, of course, the way it really is.

“In Hollywood there’s a lot of angry people.”

But what compels these dreamers to deal with rejection virtually 7/24 to chase a career where the average worker makes less than $5,000?

For one, just because. It’s in their DNA perhaps, or it’s a lifelong dream perhaps stoked by something inexplicable.

“I unlearned everything I learned in theater school to get a job in TV.”

In reality, though, there is the potential to make a legit living, to actually raise a family in Hollywood. Just be prepared for the money to come in chunks. Oh, and the dole is essential.

One myth of the entertainment business is that you either make a ton or you make nothing. In reality, a “working actor” category does exist. Check out some of the IMDB pages for these actors and you’ll find proof that a steady income stream is possible. I’m not suggesting you encourage your son or daughter to get into acting (and this film could be a sobering wake-up call). Far from it–but if it’s their dream, well, you never know. The odds of making $20 million a picture are likely the same as scoring a Jarek Deter-sized contract. For those that hustle, though, there are legitimate income streams. A backup plan would, in the words of Dana Carvey impersonating George W., be prudent.

Seemingly everything about being an actor is covered in this entertaining film: dreaming big, the audition process, rejection, getting a break, buying a car with that first paycheck, surprising your parents with success, wishing failure on enemies, being hot then being cold, buying a few days’ worth of pizza with a bad check, turning to alcohol to deal with rejection, having your car repoed, contemplating suicide during career lulls, scoring lucrative television deals.

The filmmakers do well to get out of the way and let these actors connect with the audience. Yes, there are tears; fortunately, though, sentimentality is never used as a crutch.

One of the most entertaining parts of That Guy comes early. Strangers come up to these actors with a faint notion of familiarity and think they know them from a PTA meeting, or a parent-teacher meeting. You look familiar.

And what did Mom and Dad say?

A common reaction among some of the actors’ parents was the ubiquitous “Why don’t you get a real job?” But for some it was worse: they “flipped out.” You want to be actor?!

“You have to be talented and lucky at the same time.”

Actress Heather Gordon, based out of West Hollywood, is a friend of mine on Facebook (though I don’t recall ever meeting her in person). I know her from the theater scene here in the San Francisco Bay Area–something we cover on Stark Insider. And wouldn’t you know, it was through one of her status updates that I learned of this film. She wrote, “Do you guys want to know what it REALLY is like as an actor in LA? You must watch this fantastic Documentary.”

“99.4% of the Screen Actors Guild is unemployed on any given day.”

This is Ian Roumain and Michael Schwartz’s first film and it’s a satisfying debut. But–but!–I noted a few minor issues. One concerns the overall tempo and rhythm. It’s a non-stop barrage of talking heads. Sure, this is a documentary, but a breather or change-up would be most welcome. For example, why not cut in some scenes with the audition process, or a “day in the life” sort of thing–any of those types of cut scenes would provide for some spice. As for production values, well there’s enough, but not much. But that’s a pretty minor point, after all these actors’ stories, told from the heart, carry the day.

And why do you get the job?

Update: According to actress Heather Gordon the filmmakers are shooting a sequel, That Gal… Who Was in That Thing.