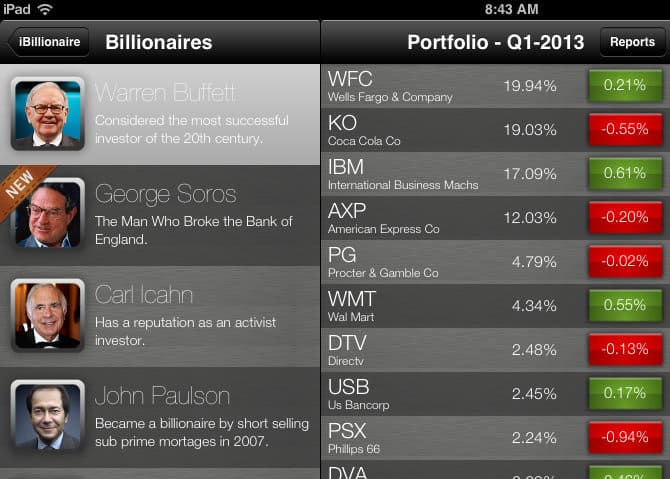 4 out of 5 stars - 'Smashing'
Free, $4.99 for premium
PROS
+
Interface is clean and easy to read. Access to portfolios and recent transactions for 15 billionaires. Strategies such as "tech. Benchmarking charts (against S&P 500). Fun!
CONS
–
Lacks advanced customization that can be found in serious investment management apps. Some are questioning the accuracy of some of the charts.
VERDICT:
"Smashing"
Clever and unique. Should receive regular rotation among your investment apps. Good luck, though, beating Warren Buffet.
Review by Clinton Stark

One of my favorite categories of apps for tablets, be it for the superb Nexus 7 or equally impressive iPad Mini, is finance. Tablets and finance apps go hand in hand. Running CBBC RT on an iPad, for instance, is as close to running your own personalized stock tracking channel as you’ll get – streaming stock quotes and all.

The category has matured, and though there’s many terrific apps of varying degrees of sophistication for tracking investments and money–SigFig, Mint, Bloomberg and YAHOO! Marketdash–most new ones don’t bring anything new to the table.

That is, until I discovered a nifty little app for the iPad (and iPhone, but no version yet for Android) called iBillionaire. I ran across the app over the weekend while I was doing my monthly scan of the iTunes store for new and interesting stuff–the XBMC remote for controlling my media center was another great find on this hunt.

You may not have access to billions of dollars to channel into the market, but that doesn’t mean you don’t have access to the brains of those who do. iBillionaire enables you to easily track the stock portfolios of 15 of the world’s most prolific investors, including my perennial favorite, Warren Buffet. Yes, the mundane matters; underwear, chocolates, and insurance can get you everywhere in life apparently.

Click on any of their avatars, and the big shooter’s portfolio pops up along with critical info, such as % of holdings, recent transactions and performance vs. the market (S&P 500 in this case).

The real fun starts when you enter your own portfolio – either real or merely to play along.

Like most other fin apps you can track your market values and gains. But here you can also compare your performance against the whales. It could be tough though. These guys (and yes, sadly, for now at least, it seems this is the prototypical group of old white men) routinely demolish market returns. While the market was up just under 50% from 2008-2012, for example, activist investor Carl Icahn managed to return 200%. Chase Coleman, the hot hand these days, was up about 175% over the same time period. And David Tepper, who according to the app earned about $7 billion by buying “distressed” financial stocks, was up an unthinkable 600%.

One interesting thing I’m planning to do is create my own personal “mutual fund” of sorts based on the holdings of Warren Buffet. I can hold all the same stocks, with the same weights, and then benefit from the Oracle of Omaha’s genius. Buffet is a good choice for me – being based in Silicon Valley I tend to overweight in tech. Buffet, famously, invests in the everyday things that we can’t live without (See’s chocolates anyone?).

No one should confuse something like iBillionaire as a serious investing tool necessarily. It’s more of a lark than anything; though I suspect there’s tidbits of knowledge and insight to be gained if used properly. I’ve only played around with the free version, but there’s a premium one that unlocks more features which I might be tempted to purchase soon… it all depends if I can earn enough returns in the next 4 weeks to justify the micro-investment. 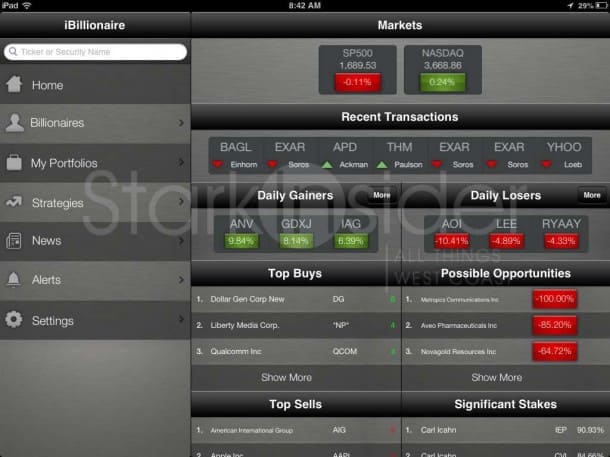 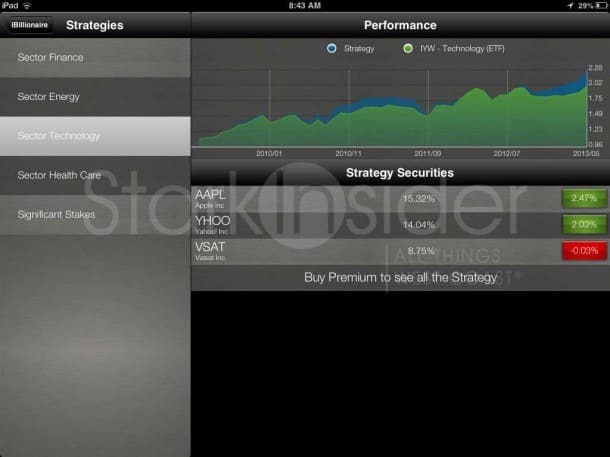