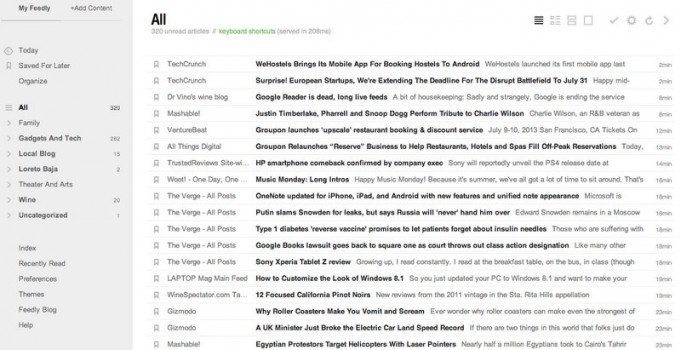 Google Reader, the popular RSS service, shuts down after today. If you’re a user and want to migrate your feeds be sure to click on the settings menu (top right) and choose “Reader settings.” The “Import/Export” option will allow you to create a zip file of your RSS feeds that can be imported into a new reader of your choice.

The fact that so many companies, big and small, are chomping at the bit, trying as they may to replace Google Reader tells you something about the market for RSS readers. It definitely exists; users are passionate about being able to quickly scan headlines from their favorite sites. If information is King, then it’s not much of a stretch to consider the RSS reader Queen.

Why Google is dropping Reader, though, still escapes me.

Surely, monetization models are plentiful. After all, where you have lots of eyeballs, you have lots of potential for ad revenue. Plus, imagine all the data mining possibilities – who’s reading what, when, where. What are the top read stories, most shared, etc. Combined with Google’s mind-boggling depth of search data, their ad targeting analytics captured by systems like AdWords, and increasingly essential mobile information captured about users on Android, you’d have to think Reader was icing on the data-mining cake.

After today, though, Google Reader is a goner. As much as I’d like to believe it was a joke, it appears the company will go through as planned, despite massive online protest, and shutdown the handy service.

I (used to) check Reader every morning. There’s no better way to get a rapid pulse of what’s happening across various industries – food, wine, tech, finance, the arts – by scanning RSS feeds. Here graphics and fancy presentation are of far lesser importance. Though I very much enjoy couch sessions with Flipboard, in the morning I need the G2 asap, and without rigmarole.

Fortunately, other companies see opportunity and there are plenty Reader alternatives. Of course, there always has been many RSS readers and news aggregators, but since Google announced their plans to shutter Reader, we’ve seen an amplification of existing services in addition to announcements of several new ones.

I’m not a huge RSS guy when it comes to volume. 90 subscriptions probably doesn’t categorize me as hardcore. I know many who have hundreds, and some with thousands of feeds.

After spending some time testing various readers (Old Reader AOL, Digg, Yoleo, NewsBlur), I gravitated towards Feedly. I like that it just works. And there’s plenty of flexibility too. You can sort feeds in various ways, and I like that the interface has a minimal mode with just the headline and datestamps – that’s very Google Reader-like and efficient.

Feedly also has iOS and Android apps. If you provide permission the app will also automatically import all your Reader feeds. No fuss, no hassle. Sweet.

Wouldn’t it be ironic if Feedly took RSS to the next level and in the process amassed a Waze-like social user base. That could make for a tempting acquisition for a company like Facebook, Apple, or … Google.

For Canadian readers: Happy Canada Day! I’m in Vancouver on a quick getaway from Silicon Valley. My goal is to walk this city to no end, stop by as many cafes and wine bars as possible, and sample as many Sushi spots that I can find.