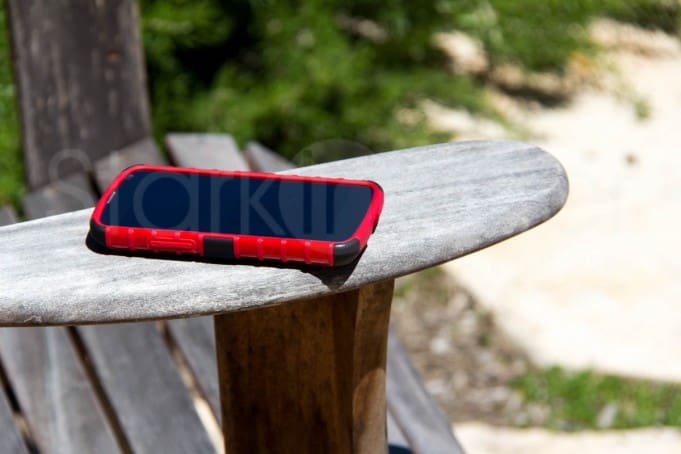 4.5 out of 5 stars - 'Right on the Money'
PROS
+
Snug fit. Nice two-piece combo of TPU/polycarbonates. Infamous Nexus 4 slipperiness replaced by gobs of Lamborghini approved grip. Kickstand. Price is right.
CONS
–
When kickstand in use, volume buttons are at bottom and unusable. Not likely to win beauty contests any time soon.
VERDICT:
"Right on the Money"
From glass beauty to rugged brute, Nexus 4 gets a manly, scratch-proof makeover. My new everyday case of choice.
Review by Clinton Stark

I’m more open these days to rugged cases; especially since the Nexus 4 is such a fragile Cinderella of a phone. The web is filled with stories of screen cracks (and also cracks in the glass on the rear) from drops even as low as two inches. Sure, the Nexus 4 looks pretty, but ultimately it doesn’t stand a chance against the elements.

Negatives of glass design aside, the other reason I’m now encasing my Nexus 4 in as much protection as possible: upgrade cycles are shorter and I’m riding the great unlocked Google train. Forget about two-year contracts. I’m upgrading as soon as a new unlocked Nexus (or Motorola X Phone?) device launches. Yep, earlier adopter at heart, plus I like to bleed a little for the benefit of Stark Insider. That means my old devices need to be in pristine condition when they hit eBay for the never ending upgrade process–I did exactly that with the Samsung GNex and, amazingly, came within about 10% of recouping my total outlay in the process. A large part of that has to do with the face that the phone was in mint condition, overly babied (and they call this a Nexus!).

All that to say I was still quite skeptical of the KaysCase (ArmourDillo Nexus 4 case in the UK) protective armor that arrived at our office.

For one, it’s ugly. It’s as if someone took a Lamborghini Aventador and added some garish foam trim pieces painted look-at-me-red, and then added over-sized SUV tires. Now my Nexus 4 is Las Vegas approved. No doubt. But, you know what? It’s a look that is growing on me. Maybe that has to do with the fact that the large plasticky/sort of rubbery nubs on the back give me confidence handling the phone–there’s no more slipperiness, and, aside from the glass screen (which remains uncovered) there’s virtually zero chance of any scratches.

Our mates across the pond sent us a tester with red accents. Didn’t they know the official SI color is West Coast orange? Still, there’s something Harley Quinn about the look. It makes a statement. Whether or not it speaks to you is a matter of Tonka taste.

At $16.50 (try Amazon where it goes for $12.95, and, yes, you can choose basic black or from four colors) it’s not an expensive case. I tend to use el-cheapos, and have had perfect success. As a bonus the designers did something clever and added a little kickstand on the back that neatly folds flush when not in use. Except, it isn’t entirely clever: when using the kickstand the volume buttons are on the underside, meaning you have to lift the phone up to adjust them – hands that, in this case, are typically too busy nursing an espresso in the morning. Hopefully future revs of the case will have the kickstand inverted. It’s no big deal for me as I’m always holding my phone, starring down at the glass (“emasculating” anyone?).

Fit is snug. The cutouts (sensor, headphone, USB port, microphone, speaker, camera) are perfect. And despite being inexpensive, the KaysCase feels well made. It’s my new case of choice… that is until I can flip my Nexus 4 for a 5, or the 5.5-inch HD Moto X-Phone. One can hope.