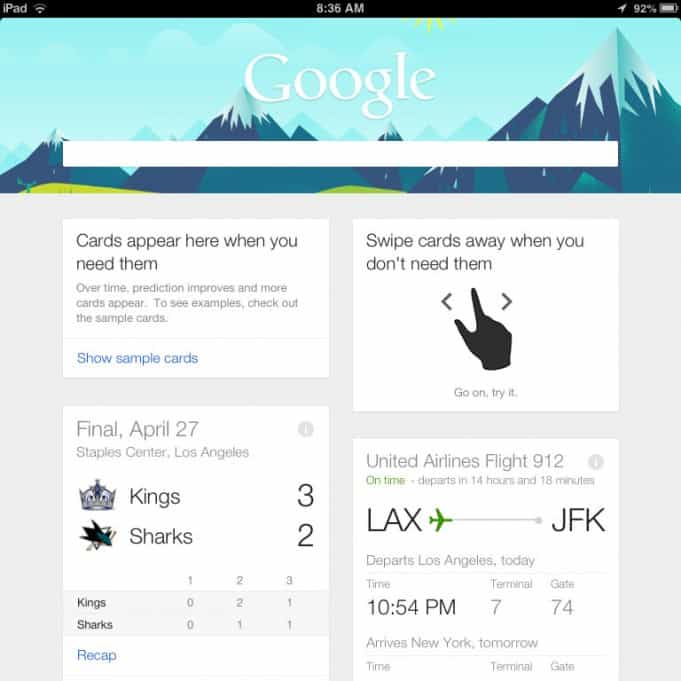 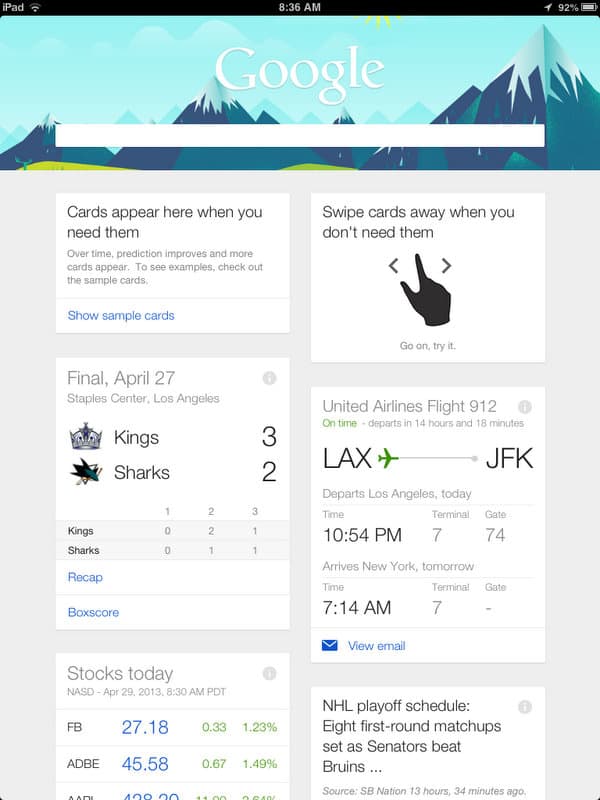 Google Now is officially now here for iOS. The voice-activated functionality was folded into the latest update of the Google Search app and can be downloaded on an iPad or iPhone. Those who have been using Google Now on Android know that it’s a very promising bit of kit. Siri, by comparison, is slow and often not as accurate.

With the advent of wearable computing around the corner (though not a forgone conclusion as some suspect), voice technology will be key in creating a new era of mobile not centered around the smartphone. Voice will be key. So will artificial intelligence together–with a combination of location-based technology and behavioral algorithms, various services (such as Google Now) will be able to understand the context of our informational needs.

I gave Google Now a spin on an iPad Mini to see how it compares to the native Android experience on a Google Nexus 4.

— To access Google Now on iOS, you need to load the Google Search app – on the Nexus 4 I hold the home button and swipe up (or use the homescreen widget)

— Cars appear in a small stack at the bottom of the traditional search screen. Touch them and the latest assortment of cards and relevant information pop up full-screen (in my case: flight status, Sharks & Giants scores, stock prices, package deliver). Drag down from the top and you’re returned to the Google search screen. Well designed.

— One thing lacking (or at least I couldn’t get it to work) on iOS: talk back. For example, if I say to Google Now “San Jose Sharks” on Android I get the score in latest game, plus an audio read-back. On iOS there’s no audio.

— You can see where Google is going with this: Cards are being integrated into web-based results 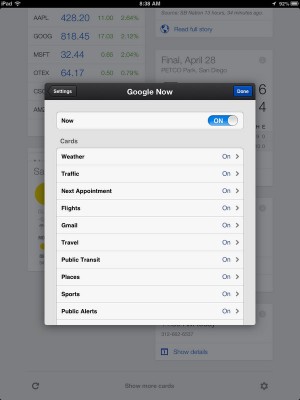 Technology aside, what’s most interesting about this bit of news today is that Google has ported its voice/predictive technology to the iOS platform. Though not unsurprising it could give it a leg up against Apple. Siri does not run on non-Apple devices.

To use Google Now you first need to login with–you guessed it!–a Google account (I use my Gmail address). This is a sly move. In some ways the Google Search app becomes an increasingly strategic trojan horse in Google’s attempt to grab real estate space on the iOS platform; and in the process attempts to woo users to the Android ecosystem. Worst case scenario, goes the thinking, at least Google can continue to enlarge its pool of page impressions, and, consequently, the potential for ad dollars.

It might seem trivial at first, just getting sports scores, weather, travel information and other day-to-day info snacks. Use Google Now for a few months, though, and you begin to realize the value of the service. Remember Bo Knows? Now, it’s Google Knows. For better or worse. Yes, you have to allow Google to sniff your inbox and search history – that’s how it gets your travel schedule, package tracking, and other personal information. For me, it’s worth it. The convenience of Google Now is tremendous. iOS users can now see what the fuss is all about. Expect to see and hear a lot more about Google Now at I/O in May and the coming months ahead. These are the early days.

Here’s the 45 second advertorial on Google Now for iOS (and, yes, these psycho-friendly style videos make me queasy, and for some reason induce me to research the benefits of Scientology):