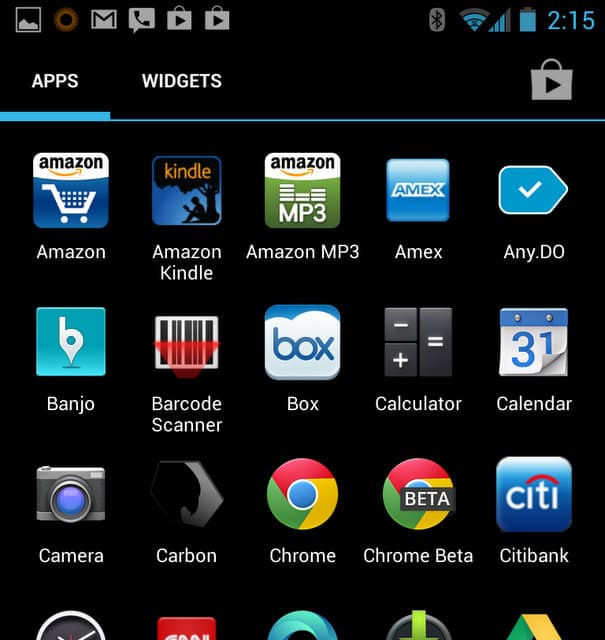 My app download rate may have slowed over the past few months (as I suspect it has for many), I’m constantly installing new Android apps, trying them out for a few days, then either keeping them or deleting them to free up more space. Given that these things are so small (5MB on average) it’s a brave new world. Compared to the days of shuffling CDs (then DVDs!) and waiting hours on end for a full app-lication of yesteryear to install it’s no wonder we have such an affection for apps.

For ships and giggles I decided to inventory my Nexus 4.

Last year I opted to get the 8GB version. Most of my content is in the cloud anyways. Google Music is my go-to music locker (with Amazon a close second). Dropbox is flawless as a convenient remote hard drive. Photos get synced it seemed by just about everything these days–Google+, Facebook, Dropbox, etc. Netflix is my movie streaming service of choice, but I never watch a film on the small screen, opting instead to play them via the PS3 on the home theater.

The other day as I looked at the Android workhorse that is the N4 I wondered: how many apps did I have on it? And, what did memory use look like? Would I soon run it, and regret not getting the 16GB version?

So without further ado, here’s what’s on my Android, with some brief commentary here and there. BTW- for those interested I recently wrote-up my favorite Android Twitter apps (there’s some great ones).

What’s on my 8GB Nexus 4 Android

Amazon – I’m a Prime member, and pretty much check Amazon before buying just about anything. Recently I bought components to upgrade the SI video editing suite, something I used Newegg for in 2011.
Amazon Kindle
Amazon MP3 – well done. But Google Music is still tops.
Amex
Any.DO – I installed this last week. Very impressive, easy-to-use task manager that syncs across web, app.
Banjo – Might delete this one soon. Interesting concept. Pulls in your social feeds (Twitter, Facebook, Instagram, etc.) and give you a location/proximity based timeline. I just noted that Steve Wozniak is nearby and is “Heading to lunch at Mandaring Gourmet to meet a fan.” See? Knowledge is power!
Barcode Scanner
Box – Might delete, but who can resist having 50GB+ of free storage at their disposal? I use Dropbox every day – I like that it includes desktop integration from the get-go.
Calculator – Incredible.
Calendar
Camera
Carbon – Beautiful Android Twitter app (from WebOS). I hope developers take cues from the aesthetics.
Chrome – Is there any other browser?
Chrome Beta
Citibank
Clock – Who needs a smartwatch?!
CNN
Currents – Underrated. Sort of like Flipboard. I like that I can sync it before a trip, and then read offline inflight. On tablet even better.
Downloads
Drive – Love it.
Dropbox – Ditto.
Earth
eBay
Facebook
Falcon Pro – THE Twitter app. Stellar. Everything about Falcon Pro works perfectly.
Flipboard
Foursquare
Gallery
GameCenter – At $50 a steal for the NHL season, albeit shortened. I enjoy streaming games on PS3 and iPad too. Cable?! What on earth is that?
Gmail – A must.
Google
Google Settings – Because you can never have enough of them.
Google+
HD Widgets – Cream of the widget crop.
Hockey – Yahoo does sports better than anyone.
IMDb
Instagram
INSTEON – Home automation.
IP Cam Viewer Basic – For checking security cameras.
KeePassDroid – Very hand for keeping passwords, credit card info, etc.
LinkedIn
Local
Maps
Messaging
Messenger
Navigation – Google trounced an industry with this one.
News & Weather – Average. Can’t be deleted. I wish Android/Manufacturers would ship better stock widgets – there’s so much potential.
News360 – Excellent.
NYTimes
OnkyoRemote – To control my Tx-NR809 receiver. Add another thing that smartphones have replaced: remote controls.
Pandora
People
Phone
Play Books – I use Kindle.
Play Magazines
Play Movies & TV
Play Music – I always try to buy my music from Google. MP3 tracks are encoded at 320Kbps which beats out Amazon’s 256Kbps encodes.
Play Store
Reader
ScoreCenter – Decent. What is going on with the San Jose Sharks?
Settings
Sigfig – Portfolio tracking. Well done. Also, looks awesome on Windows 8 (metro).
Silence
SkyDrive
Skype
Slice – This one sniffs out your inbox (hmmm…) for online orders, then sends notifications with shipping status.
Songza – Streaming music service. Concierge, which is hand curated, makes this one possibly better than Pandora. Here’s my full Songza review.
Sonos – Gold standard. 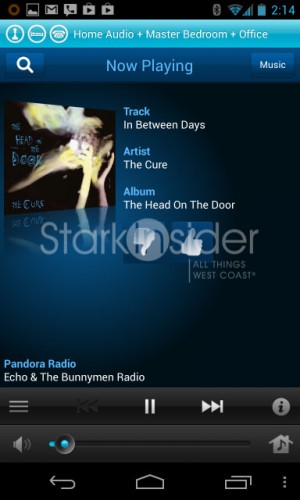 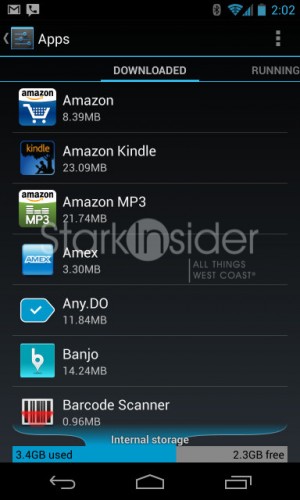 Needless to say, not a day goes by without at least a few apps getting an update. I have no complaints- the update process happens so quickly I barely notice. Plus, it’s great to see such an active developer community committed to the Android platform. It’s hard to believe, but that wasn’t always the case.

The apps I most commonly use every day are Gmail, Google Voice, Calendar, HD widgets (for time/weather), Falcon Pro, and Waze.

I’m really beginning to appreciate what Google is doing with ‘Now.’ Long press and swipe up on the home button on my Nexus 4 and I get a bunch of “cards” that eerily know what’s on my mind, like: the score in the Sharks game, how my stocks are going, travel time to my next appointment, package tracking (this could kill Slice – see above), weather, and a whole lot more. This, I am convinced, is the future. It’s even better now that Google has added a Now widget (4×4) which shows much of the same information right on the homescreen. Just flat out awesome. Who knows where this will go with Key Lime Pie at I/O, but I expect it to be a big focus for Google. 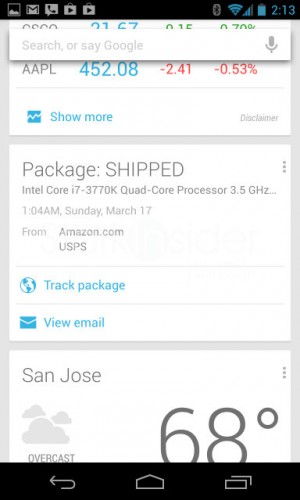 Would I ever change to iOS or BlackBerry?

Android notifications are still the best in the business. Period.

I much prefer the flexibility of the Android homescreens to the less dynamic, icon-based approach employed by Apple with iOS.

And BlackBerry?! Come on now. I’d have to give up apps like INSTEON, Songza, Flipboard, native Gmail, Falcon Pro, Waze. There’s just not a chance. What more is there to gain by moving to BB 10? In my books, nothing.

Finally, the Nexus 4 is decent. Just decent. It’s an OK phone, but not about to set the world on fire. I like what I’m seeing with the HTC One and Galaxy S4. Since I’m unlocked (like any of you running N4 via Google Play) I’m anxious to see what Google unveils at I/O. a Motorola X-Phone would be very much welcome!