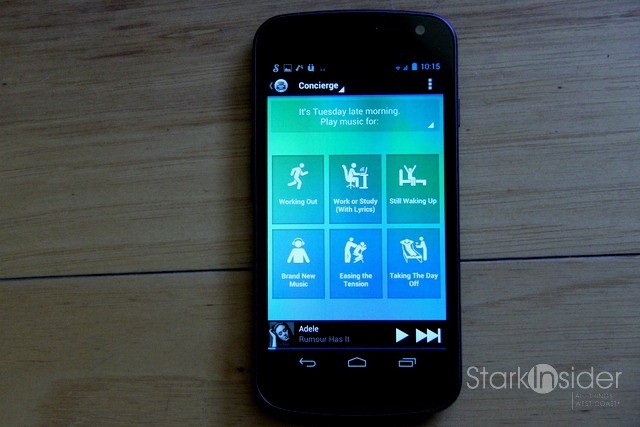 4.5 out of 5 stars - 'Right on the Money'
Music streaming service for Web, iOS, Android, Sonos
PROS
+
A mind-boggling assortment of handcrafted playlist options including ones based on genre, activity, mood, decade- even your old "record-store clerk" is here to help. Featured playlists from Slash (for the gym), Tori Amos, Counting Crows. Human touch: Songza is algorithm free.
CONS
–
App (iOS and Android) lacks artist information (bio, discography, etc.) that you can find on Spotify and Pandora.
VERDICT:
"Right on the Money"
A breath of fresh air; a streaming music app with soul. Unique "concierge" is tremendously useful. Possibly the new gold standard when it comes to smartly curated playlists.
Review by Clinton Stark 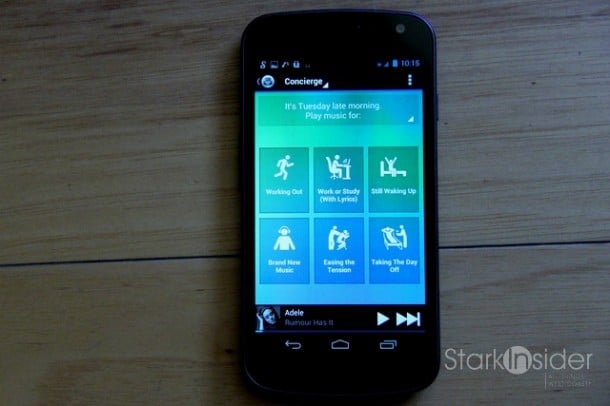 UPDATE: Quick clarification from Songza regarding this review:

@starkinsider thanks for the great review! we just wanted to let you know that all playlists are made by music experts, we’re algorithm free

Songza is either one of the streaming music world’s greatest secrets, or I’m slow to get with the get-go. I suspected the latter when I got an email from Sonos this morning inviting me to try the curated music service. After all, this is a guy who’s still working his way through Mad Men season 3 on Netflix whenever there’s 45 minutes to spare.

If you’ve followed my tech musings on Stark Insider over the years you’ll likely know I’m a big music guy. Give me 320Kbps or give me death. Power to the album art. Speaking of albums… long live the album. So, yes, I was ripping my CDs way back when .wavs were cool. Winamp was the Daddy. Now, of course, it’s all about the cloud. And genomes. So I’ve got my music up there in the cloud with Amazon (Cloud Player) and Google (Play Music). In addition, I can’t live without Pandora in the car, and as background music in the home — Spotify is also finding a regular spot in the rotation thanks to its supersmart algorithms, “extreme” quality, and recently introduced radio streaming.

What the heck then is Songza, and is there room in our music worlds for yet another streaming service?

For starters, Songza (and Sonos in the email) refers to the service as a “music concierge.” At hand are playlists curated by popular artists, a music library browsable by genre, activity, decades, mood, and suggestions based on popular moods, activities, and locations.

Songza, I discovered, is a startup in New York City whose staff includes software engineers, and music experts… and what any self-respecting startup also considers core to the business: “absurdly talented dancers.”

One neat thing that I immediately noticed and have not seen among Songza’s competitors is the ability to choose a mood and genre based on time of day. For example, choose “Tuesday Morning” from the pull down menu, and then pick a mood/activity: “Waking Up,” “Feeling Confident,” “Singing in the Shower,” Working Out,” etc. Based on your selection you’re guided through a variety of related choices; if you’re just waking up that might include classical, while for a more energetic activity the algorithm might suggest 80s, or an eclectic mix: 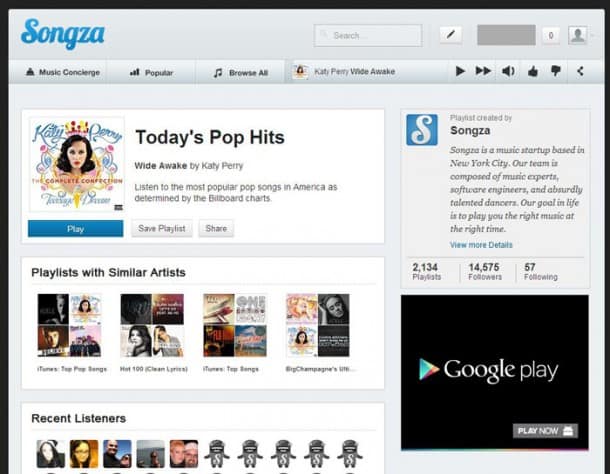 You can rate your favorites with a thumbs up to your heart’s content. Sharing is also possible to Twitter and Facebook, with a friction-less update option for the latter if you login with your credentials via Facebook (this never made sense to me, isn’t automating this sort of thing akin to social spam?)

Browsing the library is a strong point, and so far as I know not possible at all on Pandora: 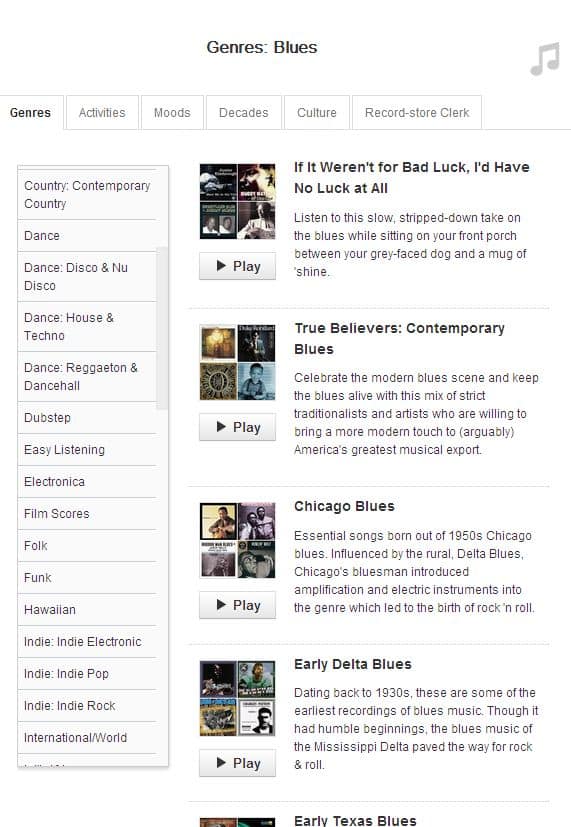 Here’s another really neat thing about Songza. There are no ads. Yep, naughta. In my testing that was a welcome relief, especially since Pandora has really ratcheted up its ad count (especially in the app). I should note that ads still run on the web and app interfaces, but no audio ads disrupt the stream.

Did Songza give me the “right music at the right time?”

Yes. Count me impressed. Spotify has the social. Pandora has the gene project. And, at least in early testing, it seems as if Songza has the state of mind. But…

For us Sonos users out there, simply go to music source, and select Songza, enter your credentials, and you’re all set to enjoy the same service via your uber-cool home audio streaming system (mine features the gorgeous sounding Play:5s, and a Bridge connected to an amplifier that powers the home’s built-in speakers):

There’s a lot to explore with Songza. Some big name artists, including Counting Crows, Tori Amos, and Slash have contributed their curation talents and contributed custom playlists you can access straight off. Sadly, no Duran Duran or Echo & the Bunnymen.

Under “explore” there’s even an option for a record store clerk. Dude,  you like “Indie music that’s not too weird”? Dig this…

Unlike Spotify with its in-depth artist bios and discographys, the Songza app is elementary by comparison. If none of that extra information matters to you it shouldn’t make a difference. Also, pop-up ads do appear on the app, though in my testing not on the audio stream itself. The shopping cart (buy) button takes you to Amazon. Jelly Bean users will like that the Songza notification bar features album art, and the ability to pause or skip a song without going to the app itself.

So there you have it. Another solid entrant in the (increasingly crowded) music streaming market.

What sets Songza apart is its curation. You get built-in playlists that are tremendously useful. Whether it be one based on your mood, time of day, room of the house, activity or one of those created by an artist or even another user, the playlists are a great way to discover new music, without having to manually dig through a bunch of obscure Internet radio stations. Based on my testing, unlike Slacker, there are no DJ-based streams (those that feature an actual DJ introducing songs, adding narrative). Still, for those who are looking to expand beyond Pandora’s limited station-based playlist creation (and crazy ad overload), this is a compelling option. If discovering new tunes, and matching tracks based on your mood are near the top of your must-haves, then Songza may very well be the new gold standard.