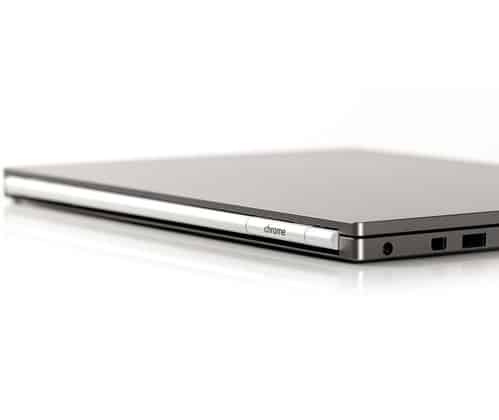 Is it just me or is Google’s freshly announced Chromebook Pixel laptop a pretty expensive dumb terminal? Or, a 2013 reincarnation of the netbook with a 400% price hike. In the words of Sean Connery in Goldfinger, you must be joking!

Okay, that’s not entirely fair. The Pixel does pack an Intel i5, an impressive high-res touchscreen (2560×1700 for goodness’ sake) rated twice that of HD, active cooling, and an aluminum body (hello Mac!).

For a laptop that weighs over 3 pounds, and only lasts 5 hours?

And it won’t even run Premiere Pro, or Photoshop?

You must be joking!

True, this is a cloud device. Google is including 1 TB (for three years) of storage. That’s a generous serving. But my suspicion is that people want low-cost cloud devices – essentially smartphones but with larger screens and keyboards. For $199 or thereabouts, the value proposition is clear… anyone can afford one, and they make for great runabouts, and secondary machines.

When you price a laptop, however, in the thousand dollar territory you’re asking a lot from consumers.

This is a machine that runs the nascent Chrome operating system, essentially a web browser with HTML 5 apps.

Granted I do most of my work in the browser – WordPress, Google, Gmail, etc. – so, yes, the Pixel could handle a lot of my busy work. But for $1,300 or so I can get a MacBook Air, which, of course, will run Chrome and all of the apps, but also let me do video editing, and run any other high performance software.

I like the Pixel concept… at, say, $400 or so. Here I was thinking Google was going to package some sort of Surface killer (not that the Microsoft tablet needs any help dying mind you).

The Pixel, at the premium price Google is commanding for what is essentially a cloud terminal – or a large format smartphone with keyboard to put it another way – requires a rather liberal stretch of the imagination.

Still, I do like where Google is headed with the concept. In a few years I wouldn’t be surprised to see Chome start taking significant chunks of share away from Mac OS X and Windows. No doubt, Apple and Microsoft are (and have been) studying its evolution closely. The current iteration is not likely to be a megahit with consumers. Then again, maybe this is all part of Google’s master plan.

That’s my first reaction at least. The announcement is still soaking in, and I need to spend some quality time with Pixel. But so far, I think this one’s going to be a tough sell. No ejector seat?! Pfft.