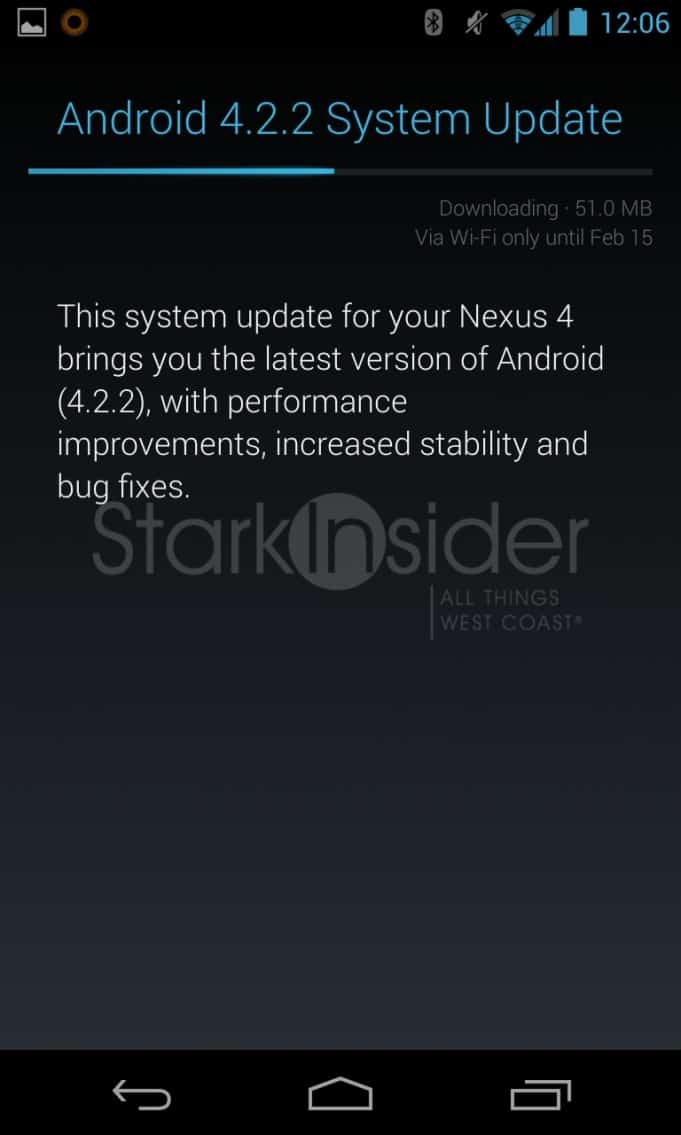 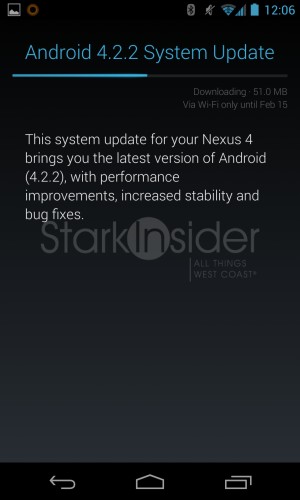 As you’ve probably already heard, Android 4.2.2 is rolling out. Google’s latest release is a minor one, as implied by the third digit counter, so there’s no new name, and, so far as I can tell, no major new features. Regardless, given the slow Android news cycles these days I’ll take anything.

I finally received the software update alert today on my Nexus 4 (an Android smartphone I’m lukewarm about, truth be told) and downloaded it via wi-fi el pronto. The process takes about five minutes, and includes a restart.

The first thing I noticed after the 4.2.2 update is that the notification animation is slightly slower. When you pull down from the top of the phone, the notification bar unfurls with (slightly) less hurry. Also, when it rolls back up, there’s no pause, or jerkiness – the motion is completely fluid. See, I told you this was a minor update!

When you download apps, the progress bar now also includes extra information such as percentage complete, and estimated time remaining.

I’m told there are new sounds. One is for low battery – it’s apparently more pleasant. A smart choice. The last thing we need as we scramble to finish an email or read the final directions while navigating before the juice runs out is an ingratiating wwwwaaaaahhhh tone. Also, there is a new tone that indicates wireless charging has begun. I can’t test this as I don’t have the wireless charging orb, and I doubt I’ll get one given my proclivity to swap out this LG Nexus 4 for a better Android at the next available opportunity. I do wish Google would bake in some new ringtones.

As for stripping away LTE capability, none of that matters to me. For starters I’m on T-Mobile and am perfectly satisfied with the HSPA+ network performance. Also, LTE is an infamous battery drainer, so I can do with out that… for now.

Bring on the Key Lime Pie!

there may be more…