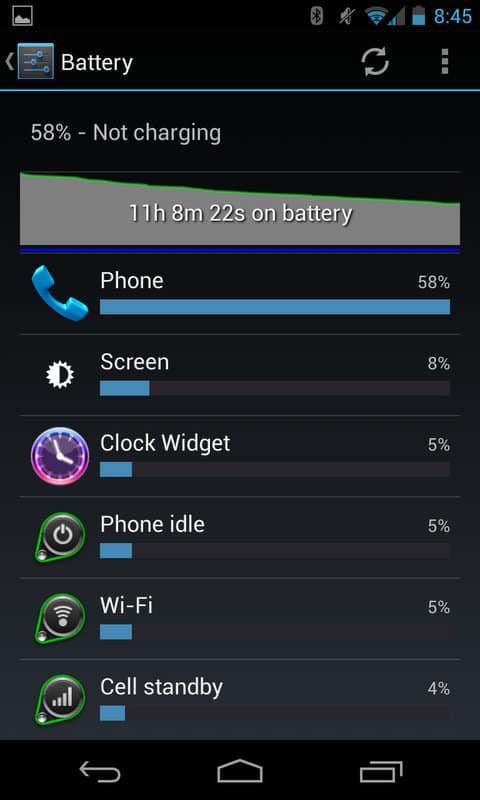 Just about the first thing anyone asks me about the Nexus 4 Android smartphone is related to the battery life. Will I make it through the day, they wonder. That’s often quickly followed by another common one. Is Android really better than iOS?

My answers: yes, and most definitely yes.

After spending a few weeks now with LG’s flagship Android smartphone, the Nexus 4, or the “Google Nexus 4” as some call it, I’ve been able to get to know the phone’s behavior when it comes to that all important question of battery life.

My observations here are of the day-to-day variety; by no means scientific. You’ve likely read plenty of battery life rundown tests already. Typically they reveal that the Nexus 4 gets just under four hours of “on-screen time,” the latest and most common metric for assessing smartphone endurance. I was quite surprised to read in this review and comparison that the 4.8-inch Nexus 4 fared worse (315 minutes) in a battery rundown test when compared to the 5-inch Droid DNA (379 minutes) – a handset that has been at the forefront of a Q4 battery controversy in the world of Android. Check the forums and you’ll find endless debate. That result is a bit of a head scratcher. You don’t hear as much hooting and hollering about the poor battery life on Nexus 4. In fact, no one really complains at all.

Having come from  the stellar Google Galaxy Nexus (i9250) I’ve never had any issues with getting through a work day (first impressions of upgrading from GNex to the Nexus 4). One nice thing about Google’s unlocked devices is that they don’t have LTE. For many this is the work of the devil. For me, it’s a benefit. For one, T-Mobile’s upgraded HSPA+ network is speedy enough – why do you need 50 Mbps on-the-go for… are you downloading Avatar torrents? Lack of LTE, though, as is well known at this point, mean less battery drain. So absence of Verizon’s antenna is a win-win, at least in my books.

Battery testing is a bit of a black art. It seems each tech site has its own magical recipe for measuring drain. Some turn up brightness to full, and cycle a video. Others try to simulate real-world use by surfing the web with the screen around 50-60%. So it can be really difficult to get at reality. Ultimately, there’s probably no better substitute for just using the phone as you would normally through the day.

What is normal use for me?

For one, I absolutely do not turn off anything.

The worst battery advice I’ve seen goes something like this: turn off wi-fi, turn off Bluetooth, turn down the brightness to 10%, throttle network speed and only use 3G, remove all active widgets, shut down Facebook, Twitter and Gmail, and … try to never turn on the screen. But why stop there!? I say, turn off the phone completely and chuck it into the nearest abyss. You’ll be amazed at how good the battery life can be!

Okay, back to the heart of the matter. I check Gmail regularly (one account), occasionally check/update social networks such as Twitter, Facebook, LinkedIn and Instagram (increasingly rare these days), check Google Calendar for appointments, read a few news headlines via News360, Flipboard, CNN and NYT, and surf a few web sites via Google Chrome. When I’m not using the Nexus 4 I do depress the power button to turn of the screen. I have brightness set to auto. And all networks active – that includes wi-fi, Bluetooth (for pairing with the Prius), HSPA+. I also use the Light Flow app, and absolutely love the notification lights and all of the customizations you can do with them.

With all that, I can easily make it through an extended work day.

Starting at around 6-7am, I regularly get 12-14 hours of use, per the above scenario, and have about 20-30% charge around 8pm or so. I consider that very good performance. No, it’s no on par with the likes of the Motorola Razr Maxx, but then again no other phone is. Not once have I had the Nexus 4 die on me. And I do not charge the phone at the office. If I’m using Waze for an extended period, then I will have it plugged in.

Also, LG has done decent work with standby mode. I’m not as sure it’s as good as what HTC has done with the Droid DNA, but if I leave Nexus 4 sitting idle, it sips little juice. I don’t think it’s quite iPhone territory – Apple does an exemplary job of power conservation with the iPhone and iPad when idle.

Note that I hardly ever stream video. I suspect that’s a sure-fire way to drain it (and any other smartphone) really fast.

These are just a few brief observations related to the Nexus 4 battery life and day-to-day use. Again, you can look up all the data-driven comparisons out there. But if you’re wondering if the N4 battery will get you through the day, wonder no more. At least in my use, it does the job perfectly well.