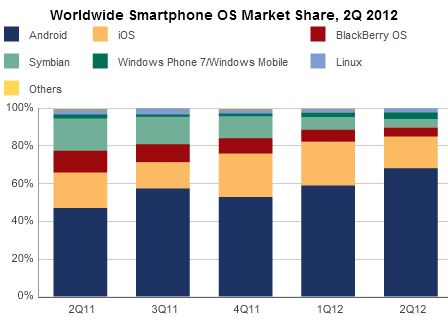 A good old former Silicon Valley colleague of mine, Anil, shared the slide above on his Facebook page. It’s smartphone OS market share for Q2 as tabulated by IDC. I knew the Q2 numbers were out there, and that Google’s Android was continuing to strip away marketshare; but I hadn’t yet dug into the numbers or charts — something about writing up wine tasting notes, and theater reviews.

I can summarize this chart in two words:

Meanwhile I can’t help but think we in North America like things in twos. Coke vs. Pepsi. Democrats vs. Republicans. Chocolate vs. Vanilla. Freddy vs. Jason…

According to IDC Android runs on about 68% of smartphones. Or, simply about two out of every three smartphones you see out there are running some version of Android.

Recall, Android first came to market in a big way (I realize early “Cupcake” and “Donut” builds were available from T-Mobile before this on the G1) in late 2009 with the now famous “Droid Does” campaign and the release of the flagship Motorola Droid (which I promptly signed up for at a local Verizon store).

That’s not even three years ago.

In only 32 months Google has gone from zilch to the whole kit and kaboodle. Again, astounding. The only comparison point I can find that comes close is the equally astonishing pace at which Apple dominated the tablet market with the hugely successful iPad; and in some ways that might feat might be even more impressive because Apple defined a completely new market, and in the process killed the PC.

What’s most interesting are not the numbers themselves, but the strategies the players employ to attack the market.

Apple, of course, is vertically integrated, making its own hardware and software, thereby tightly controlling the entire user experience. But it risks doing it all on its own by limiting product choice, access, and price points.

Google, meanwhile, is attempting to have its cake and eat it too. It’s licensing Android to all comers, but is also now neatly lining up a direct go-to-market model via the revamped and much improved Google Play Store. Both the Galaxy Nexus smartphone and Nexus 7 tablet are doing well, especially the latter which enjoyed sell-outs last month. The Nexus Q bombed and it was smart of big G to yank it.

Unless something Herculean happens, RIM and Symbian are all but dead (at least in North America). Perhaps RIM can retrench to its core, the enterprise. That’s increasingly difficult as consumer apps — driven by Apple and now Google — are driving IT and employees to bring their personal phones to work. Those run iOS and Android.

That leaves Microsoft, who is finally beginning to move the needle on market share (to about 3.5%) as these Q2 results demonstrate. Good on ’em. It’s been a long time coming. I expect them to steal away some remaining share from RIM and take away some low-end from Apple and Google.

At the end of the day this is a two-horse race:

In the 80s it was also a two horse race:

Apple continues to enjoy a resurgence no one could ever have predicted back when Gil Amelio was at the reigns. However, they’ll want to employ every miracle trick they have to avoid becoming a niche (i.e. less than 10% market share) player as they did in the PC operating system wars.

Meanwhile I can’t help but think we in the U.S. like things in twos. Coke vs. Pepsi. Democrats vs. Republicans. Chocolate vs. Vanilla. Freddy vs. Jason…

And for the next 5-10 years it appears it’s going to be Google vs. Apple.