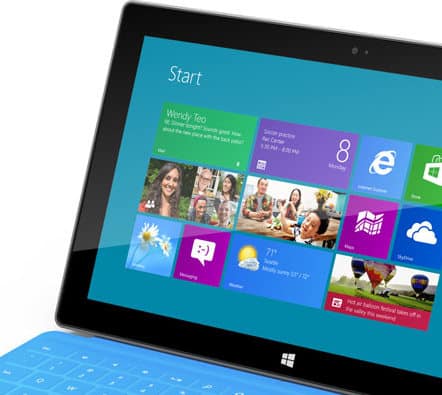 For a company under siege, Microsoft looked pretty scatter brained at this week’s launch of the new Surface tablet. Running Windows 8 — a light “RT” version with an NVIDIA Tegra chip, or the full-blown “Pro” variant featuring Intel — the tablet is the company’s most likely path to post-PC relevance. And right now, of course, that market and future opportunity, belongs to Apple. The Windows operating system as we know it continues to fade. Cloud computing has something to do with that. Running apps via a browser, utilizes resources on servers hosted elsewhere, and lessens the need for powerful hardware and operating systems. Mobile computing is also allowing us to leave the keyboard/mouse/monitor behind. Microsoft knows all this. So it was somewhat surprising that Monday’s Surface announcement didn’t floor us. It should’ve astounded us, had us collectively with jaws on the floor, drooling… I want one, I want one. Apple knows how to do this.

Can Microsoft’s Surface tablets save Windows?

What Microsoft launched with these two slick-looking tablets was consistent with it always has done: view the world through the eyes of its Windows operating system. So it’s not a tablet in their view. It’s a portable Windows device. It’s a way to shift desktop licensing revenue to tablet licensing revenue.

The problem is that consumers don’t view it that way. We buy tablets because they help us do something, be it productive, or leisure-based.

First there is the casual tablet user. He wants to read books, magazines, check email and Facebook; maybe download the occasional game, and surf the web. Amazon nailed that segment with the portable 7-inch Kindle Fire, priced at only $199. It’s selling like gang-busters, and the first Android-based tablet to have significant market impact.

If Microsoft wants to appeal to the mainstream tablet consumer, they might want to double down on gaming and Xbox Live.

The other type of casual user is willing to pay more, and wants the premium experience. For them there is the Apple iPad. End of story. Say no more.

But there is a smaller, but one could argue equally important, tablet buyer. This is the power user. She wants the fastest processor, a highly flexible operating system that can be customized, and if the device can be rooted/flashed than all the better. Android owns this space. It’s not large. But ask any tech-geek which tablet they own and they’ll likely tell you about the Asus Transformer Prime, or the Samsung Galaxy Tab 10.1. Under their breath, if you push them over a pint of Gordon Biersch, you’ll get the reluctant admission: they too own an iPad. But they – me! – prefer to talk about Android.

Microsoft would appear to have a fundamental issue with positioning. The Surface is too powerful for the casual user, and yet it doesn’t offer enough compelling reasons to make us Androids switch.

Reports this morning suggest the entry RT model will be priced around $599 with the Pro model coming in at an eye-watering, ultrabook-like $999. These figures appear reasonable to me given Microsoft’s history in the tablet space, and — again — with their penchant for viewing the mobile space as shrink wrapped Windows on wheels. Yet with its (quite pretty) tile-based Metro user interface, Microsoft clearly is targeting the casual market, at least when it comes to the user interface. Pricing, however, suggests otherwise.

Power users might flock to Surface, especially the Pro edition which can run full-on Windows. This could be particularly interesting for the enterprise market, Microsoft’s home turf when it comes to server OS and office software. On the consumer side, Android is the incumbent, however, when it comes to appeasing the needs of the power user. At the upcoming Google I/O we’re likely to hear more about the next wave of Jelly Bean (Android 4.1) driven Android tablets. Expect developers to be pleased with what they see.

There is a wild card when it comes to Microsoft’s tablet strategy. And I’m surprised it wasn’t woven into their tablet story (like it is for Windows Phone). Expect to hear something about it — if they pull it off, it could be a (literal) game changer. And that is:

Gaming has been a huge growth area for Microsoft’s (granted last quarter saw some weakening in revenue). The Xbox video game console (2001) and its Xbox Live online service (2002) give Microsoft a compelling, differentiated feature-set at its disposal. The obvious play would be to include Xbox in its mobile strategy. Some of this, of course, has been done already with the integration of Live and Windows Phone. But tablets have larger screens, faster processors. The appetite for on-the-go gaming can not be underestimated. Just ask Nintendo. Apple who?!

If Microsoft wants to appeal to the mainstream tablet consumer, they might want to double down on gaming and Xbox Live.

If Microsoft wants to appeal to its enterprise customer (which accounts for the lion’s share of its $69B annual revenue) it should continue on its current track with its current tablet strategy.

As it stands now, on the Surface at least, Microsoft has one toe in each of those ponds.

But when it comes to saving Windows, it needs to deliver nothing short of a canon ball.