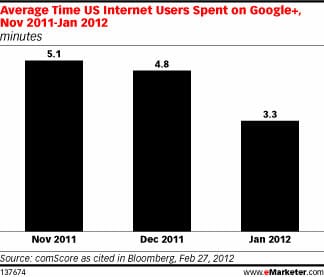 While the Google+ social network has signed up significant numbers of users since its July 2011 launch, it’s not seeing nearly the same engagement as rivals such as Twitter and Facebook.

Comscore has released its January 2012 numbers for Google+. According to the report, for the third consecutive month, the average time users spent on the social network has dropped. The average time users in the US spent on the social networking site was down to 3.3 minutes in January 2012, from 5.1 minutes in November of last year.

This from Kimberly Maul, eMarketer writer/analyst: “Google+: Influencing the Integration of Search and Social.” “However, engagement and participation aren’t up to speed with other social networks, and that has become a major obstacle for turning Google+ into a relevant social network.”

Potential theories for the decline abound:

(a) A user is producing less content, or she’s found a bullet-friendly format that makes content rapidly digestible.

(b) With much more interesting new alternatives such as Pinterest and Instagram (that differ significantly from Twitter and Facebook), we’re reaching a social saturation point, where only social networks with compelling new features garner attention.

(c) With so many technophiles in its corner, Google+ is the first successful niche social network (MySpace, my regrets), and proves that the one-size Facebook model is not necessarily the future.

While we’re at it, how is it possible not to suggest that Google+ is the spitting image of Facebook? If Zuck had followed in Page’s footsteps with Facebook could you imagine the uproar?

G+ is in some ways a much better Facebook. For example, Hangouts and Circles are both superbly designed, marquee features. But Google’s desperate reliance on lassoing us all in from all parts of the web — Gmail, Search, Picasa, etc. — reeks of a social Hail Mary.