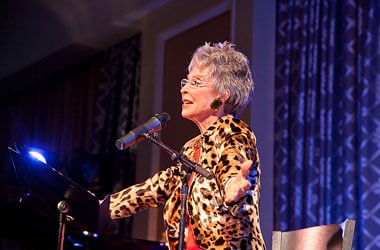 Berkeley Rep has announced that on April 28, legendary actress Rita Moreno will host the Onstage gala at the Four Seasons San Francisco, featuring a gourmet dinner, wines and spirits, and an opportunity to bid on getaways and culinary adventures.

Onstage is an annual gala where theatre lovers, gourmands, and philanthropists gather to celebrate the neighborhood playhouse with the international reputation.

Most people don’t realize that the Tony Award-winning nonprofit earns only half its income through ticket sales. We’re told this gala helps make up the difference, ensuring that audiences continue to experience the artistic excellence they’ve come to expect.

“As we honor the artistic achievements of Berkeley Rep, we’ll also toast the 10th anniversary of our School of Theatre,” said Artistic Director Tony Taccone. “Over the last decade, the School has touched the lives of nearly a quarter of a million students with its arts education programs. As public funding for education continues to decrease, and the arts become less accessible to children, this outreach is essential to foster the creativity and ingenuity of tomorrow’s leaders.”

The gala features a four course dinner prepared by the executive chef of the Four Seasons San Francisco, Mark Richardson.

Fritz Hatton, chief vintner of Arietta and principal auctioneer for Zachys Wine Auctions, will lead the auction. Lots include collectible wines and gift certificates for elegant hotels, restaurants, and arts organizations –tickets to a VIP party in the owners’ box at Yankee Stadium, theatre trips to New York and Chicago, and a special visit to the Humana Festival of New American Plays with Les Waters, the new artistic director at Actors Theatre of Louisville.

Tickets for the Onstage gala begin at $500. Tables are priced between $5,000 and $20,000. All proceeds from the event support the nonprofit Berkeley Repertory Theatre and the organization’s education and outreach programs.