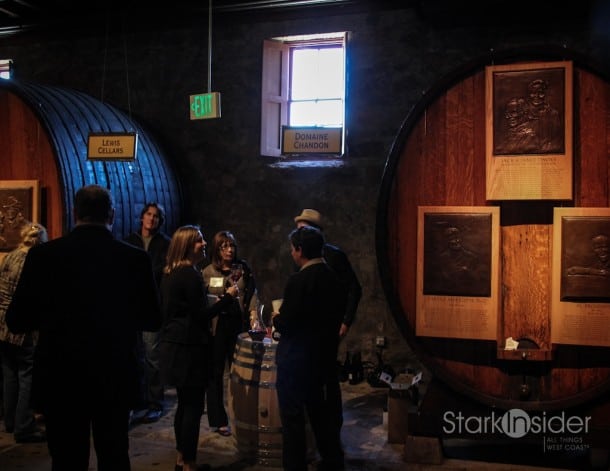 If the annual event is any indication of what’s in store for 2012 then things are definitely looking brighter; though I’d take that with a wee bit of Charlie Brown… there were some well-heeled international buyers intermixed with the distributors and retailers. During the auction I was fortunate enough to sit next to the owner of Bin 104, a fine wine retailer based in Edmonton. He and his partner kept their paddles busy, winning some lots (Conquerel), but losing others. Earlier over lunch, I chatted with some distributors out of Reno. Veterans of the auction, they were optimistic they could score some prized lots and either mark-up and sell through their channels, or do a favor for some valued clients by procuring cases that would otherwise be impossible to source.

The day is a bit like a living, breathing futures process

In the morning, the 200 participating wineries previewed their vino straight from the barrel. The tasting, held in the gorgeous CIA Vintners Hall of Fame, affords an early chance to taste what might be. Most of these wines will sit in barrels until they’re bottled some time in 2013.

Muscat… Qu’est-ce que c’est?! This is the land of red: the land of the big, bold Napa red. I’m unapologetic in admitting it’s my favorite varietal and region, bar none. Close seconds are Pinot from Carneros, and Chardonnay from Sonoma. But when it comes to the pleasures of the grape, it’s about as good as it gets. Newfangled varieties be damned. Trends come and go. Napa Cab is already, at a new world young age, a classic. The Valley may be only 1/8th the size of Bordeaux, but for me that makes it all the more special. Judging by the $3+ million take this year, I’m not alone in that view.

Reviewing my notes I had several favorites- quite a few in fact. Though the barrel room was crowded, I was able to make the rounds. Bruce Cakebread himself was pouring a 2010 Cakebread Vaca Range Blend (Julianne Laks, winemaker) which I thought was terrific. Expressive as a Salvador Dali, yet showing early signs of complexity. Then there was TOR Kenward. Here’s a guy to watch. I first got to know his Cabs at a To Kalon media tasting at Mondavi. On offer, a Beckstoffer To Kalon (Jeff Ames), this time straight from the barrel – expected delivery Oct. 2012. Do yourself a favor and hunt down TOR’s stuff.

Artesa is a massive, modern estate with spectacular views overlooking the valley. Often it gets dismissed by the in-crowd as too commercial. I say ignore that. Good wine is good wine. Small, family run operation or sprawling conglomerate- no difference to me in terms of the taste. A few years back I sat down at Artesa and tasted their Pinots exclusively all morning (those that have been will know their selection is wide and deep!) and came away with a simple conclusion: “basic” estate Pinot by Artesa is a value play, a winner. I loaded up a rack in our cellar and have been enjoying it since. Same held true at PNV with their ’11 Estate Los Carneros Pinot Noir (Mark Beringer). Expertly made, and a pleasure if you’re into smooth, silky reds, with that ever familiar Pinot nose. You know it in a jiffy pop when you get a whiff of that unmistakable earthy-sweet Carneros Pinot fragrance.

Silver Oak is always worth a mention. 2010 Cabernet NaSoCaRa Napa Valley (Daniel Baron) is tasting well, from what I can tell. It won’t bottle for another two years, so these things can always evolve. Expect the unexpected. With Silver Oak, though, you’re in for a treat. I occasionally pull one–when Loni, the obsessed collector, gives me a rare green light–from the cellar for special dinners with family and friends.

A quick shout out to the organizers. PNV is world class, yet it doesn’t feel in the least snooty. Classy, yes, and there is a tremendous camraderie during the events leading up to, and at the actual auction itself. Napa Valley Vintners did yeoman’s work on everything from the efficient shuttle service (whisking us back and forth from the St. Helena Marketplace), and the outrageously, over-the-top superb lunch (inside the monstrous CIA kitchen) to the tracking of the auction results (via live scoreboard) and staff working the booths and media tables.

And, of course, Team Stark shot the event, and here’s the highlights… ps – watch out for a crazy auctioneer baring a hammer! (he was great, and really fired up the bidders)