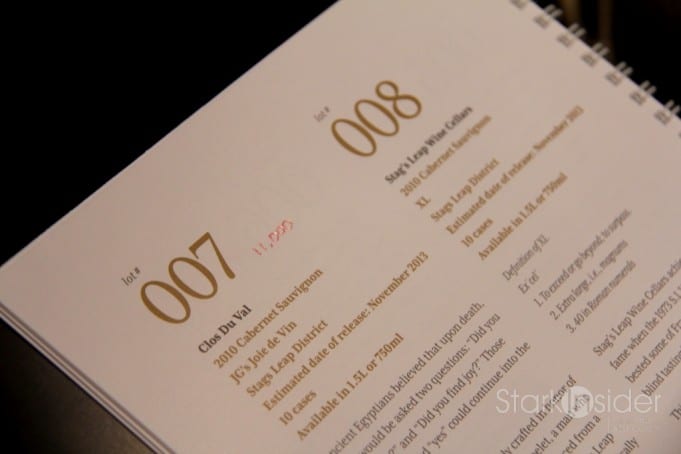 $3.1 million. That was the final tally here at the mega wine auction known as Premiere Napa Valley. The annual event shattered last year’s mark, with an impressive 31% increase in sales. According to organizers, 64 successful bidders captured 200 lots representing 1495 cases of wine. The average case price was $2,069.

In a PNV recap, Clinton Stark wrote, “the day is a bit like a living, breathing futures process.”

Glamour cults such as Screaming Eagle, Scarecrow and Harlan Estate were not among the 200 lots up for auction, making way for others to grab the spotlight. For now, that could very well be Dana Estates. 5 cases of their 2010 Cabernet Sauvignon (Napa Valley) sold for $70,000.

Hosted by the Culinary Institute of America (at Greystone), hundreds of media, trade, and paddle poppers poured into Napa Valley for the 3-day event which is considered as a leading indicator for the health of the fine wine market.

Napa Valley Vintners wrote on their Facebook page, “What an incredible week in Napa Valley with all of our friends in the trade and media, capped off by a record-breaking day today at Premiere Napa Valley (more on that tomorrow!). Cheers to 2012…we’re off to a bright beginning! It takes a village, in this case, a very special valley. Thank you to you all.”

The Napa Valley encompasses 16 AVAs (with the most recent Calistoga, added at the end of 2009) and produces 4% of California’s wine grape harvest.