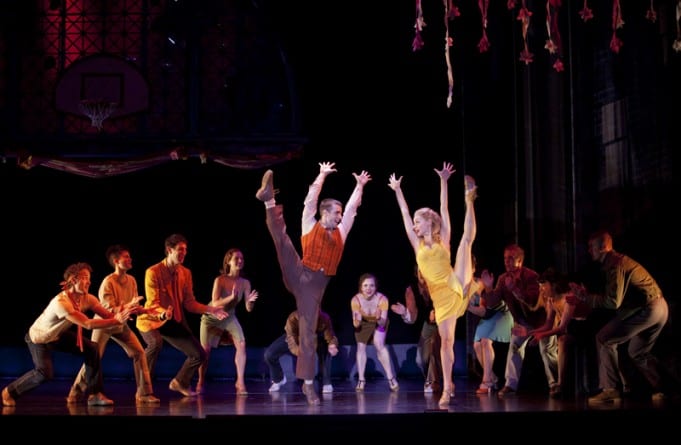 I confess, despite my best intentions, I arrived at the opening of Broadway San Jose’s opening of West Side Story several minutes late. As always, this meant getting schlepped up to the northwest corner by an usher who bore a slight resemblance to a stereotypical Catholic school nun, circa 1970. She didn’t give us dirty looks or whap our knuckles. It was worse:  she didn’t have to.

This error turned out to be brilliantly fortuitous because I’d never seen West Side Story from the cheap seats. This opened a whole new vista on the choreography and blocking. Ensemble characters related in ways that I’d never seen before. Dance scenes could have been drawn out with arrows across the stage as if it were a football play. This production cries to be seen from on high in the cheap seats. Not only does the power and intensity of the production reach that far, but you can appreciate the integrity of the work in ways that were, for me, unimagined.

My second confession is that I’ve never seen a production of West Side Story that I didn’t like. This alone raises questions because West Side Story isn’t not the easiest production to cast or to stage. Is it possible that this work is so inherently good that it shines through even a mensa mensa production? While an argument can be made that a score by Leonard Bernstein, original direction by Arthur Laurents, choreography by Jerome Robbins, and lyrics by a young Stephen Sondheim will defeat even a lack-luster cast, there’s too many exceptions in which all-star credits failed to save a show. After all, one has to look no further than the recent San Francisco production of Bring it On: The Musical for a example. Alternatively, it is possible that the work itself compels actors and dancers to rise to the occasion. These are meaningful questions that require further consideration. However, for our purposes, the Broadway San Jose production positively shone, with impeccable choreography, vibrant performances and strong vocals. In many ways, this exceeded the quality of the San Francisco production back in October 2010. 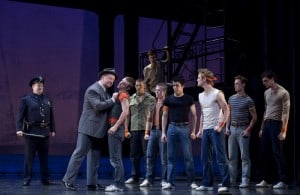 A more meaningful question involves the incorporation of Laurents’ new material from the 2009 revival. This is the second time I’ve seen the revival version – and it feels better and better. The increased violence prevents the show from lapsing into a maudlin 1950’s musical and the periodic injection of Spanish increases the animated quality of dialogue. My only quibble is the Spanish injected into “I Feel Pretty”; it’s more of a distraction than anything else.

This particular cast was exceptionally strong, with Evy Ortiz and Ross Lekites as Tony and Maria, Michelle Aravena and German Santiago as Anita and Bernardo, and Drew Foster as Riff. Ortiz’ voice seemed slightly ill-matched with her cast mates during the first act, but this very slight disjunction was entirely absent during the second act. One possible explanation is that her coloratura training differed from the training of other lead vocalists.

Such nits aside West Side Story is worth taking in.  It runs through January 22nd at the San Jose Center for the Performing Arts.