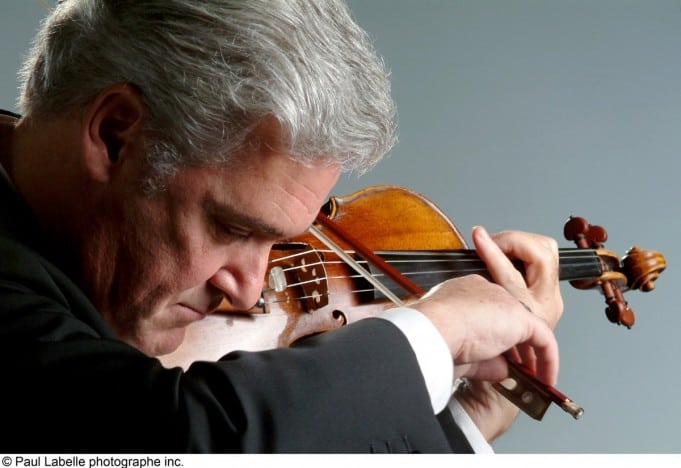 When explaining the magic of the violin, Joseph Marchese, author of The Violin Maker turns to the veritable Grove encyclopedia: “The violin is one of the most perfect instruments acoustically.”  According to Grove, this acoustic perfection is why the violin ranges from sweet Vivaldi chatter, to  the pathos of the second movement of Tchaikovsky Violin Concerto in D, to the rapid flights in Paganini’s Caprice No. 16 in G minor, and everything in between. The argument can be made that more than any other instrument, the violin’s got soul. If you throw Pinchas Zukerman into the mix, the effect is dizzying.

I first heard Zukerman play in the early 1980’s in Avery Fisher Hall, when he was a fairly new transplant to the American scene. I no longer remember what he played, but I remember knowing that it changed how I thought about music and what music was capable of. Although I frequently return to his many recordings, I hadn’t heard him perform live since, so his concerts at Davies, which will be running through Sunday, caught my immediate attention. In a world of many virtuoso violinists, he remains in a class by himself. Several samples from this concert are available on the San Francisco Symphony website. These are worth exploring, as even the tinniest computer speakers can’t defeat the beauty of Zukerman’s playing. There are some performers that can stop time – and Zukerman is one of them.  We darn lucky to have MTT here, but Ottawa, with Pinchas Zukerman, has its place in the classical music firmament.

Programming for this concert is heavy on Mozart.  None of this plays like the exuberant, seemingly amphetamine-crazed Mozart that some people find off-putting. Rather, there is a richness, fluidity and depth of tone that you never imagined possible. The program begins with Mozart’s Adagio in E Major, and continues through with the Rondo in C Major, Violin Concerto No. 3, and  Symphony No. 40. While the No. 40 does get over-performed,  Zukerman brings nuances to this work that I had never heard before.  The program also contained Paul Hindemith’s Trauermusik.  This seemed an odd choice, but it does give Zukerman the chance to tantalize the audience as he switches from violin to viola.  Trauermusik,  or Music of Mourning, was  written in a single day for the funeral of King George V in 1922. The dissonances and unexpected turns in this Trauermusik sound a little like Schulhoff in his less avant garde moments.

2012 presents astounding choices for classical music lovers in the Bay Area. No only does the list of world class guest performers go on and on, there are a number of very significant local premieres, not the least of which is Nixon in China. Despite all these choices, Pinchas Zukerman should be on your short list.