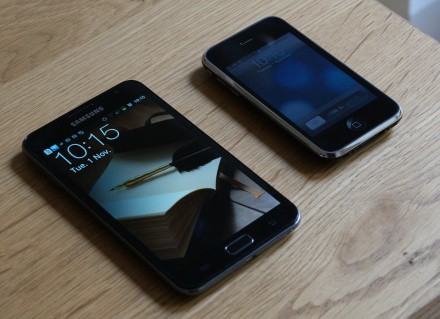 I’m not quite sure what to make of the new Samsung Galaxy Note. With its 5.3-inch screen, it slots between a tablet and smartphone, and stretches our concept of portable. Time will tell if this is no man’s land or the sweet spot. AT&T will release it on Feb 19 for $299 with two-year contract.

On the one hand…

If your pocket (or purse) is big enough the Galaxy Note could be a powerful, fun-to-use, and productive smartphone. With a 1.5 GHz dual-core processor, 8 MP camera and Android (Gingerbread 2.3.5) you won’t be lacking for features. Surfing the web will be luxurious. And reading emails and updating social networks should be equally compelling on the Note. Ditto for gaming.

It’s too big for the mainstream. A cell phone is supposed to be portable. I’m all for change and evolution, but there’s a reason why tablets sell well at 10-inches, and phones sell well at 4-inches. Each servers their purpose well.

On Android Design: “Sometimes you have to break the rules”

Also, battery life – already a concern with 4G LTE devices (Could 2012 be the year of real Android battery life?) – will likely not be great, and there will be few apps designed to take advantage of the larger display.

Will the Galaxy Note sell?

Yes. I don’t think in volume, though.

If it surprises, and catches on, though, expect others to follow. In which case, I’ll really be scratching my head, as the lines continue to blur: 4, 5, 7, 10, and 14-inch displays… tablets, smartphones, netbooks, laptops, ultrabooks, hybrids (Asus Transformer Prime). If anything 2012 could be the year of model proliferation and experimentation. We may see slower Android release cycles as referenced by both Samsung and Motorola, but what we might seen instead is vendors looking for ways to bust open niche markets. The Galaxy Note will be the first big test. Do you want a 5.3-inch Android?