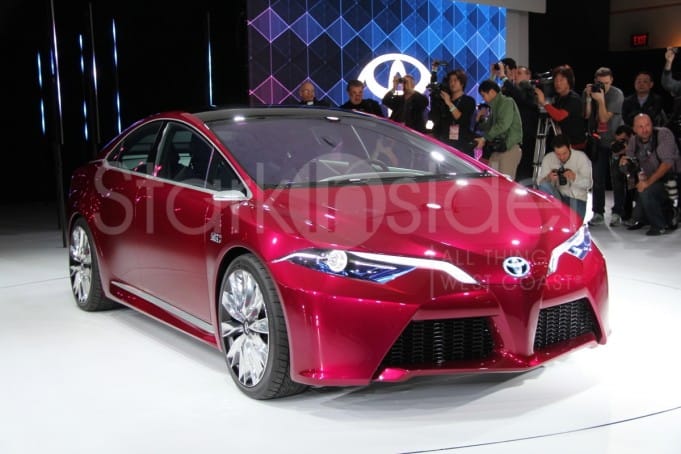 At a hybrid-centric press conference this morning in Detroit, Toyota took the wraps off its latest hybrid, a four door sedan. The aerodynamic, slick model, dubbed the Prius NS4, is planned for 2015.

You could be looking a preview of the what the next generation Prius might look like (the NS4 shares virtually the same dimensions/platform specs).

In addition to the NS4, the Prius c (“city”) was announced, a smaller (19-inches shorter than the standard Prius) four door model targeted at young buyers who previously might’ve found the hybrid experience out of reach.

Priced at around $19,000 it will be the least expensive plug-in hybrid on the market – and will even cost less than Toyota’s firstgen hybrid from twelve years ago.

Total system power is 99 horsepower with fuel efficiency rated at 53mpg. Toyota indicated they expect to sell 15,000 per year.

No other major announcements were made, although the company did note that half of every hybrid sold in the US is a Prius.

I really like the look of the NS4. In Detroit this year we’re seeing a lot of “eyebrow” style treatments with headlights. Tail lights are also seeing similarly pleasing treatments (see the Lexus LF-LC concept for a gorgeous, wild example). Here you can see the trend continue with a contemporary look that retains the traditional Prius wedge shape yet adds some muscle (relative to hybrids that is!) to the grill with a waterfall aesthetic. Designers are on the market. A- —Clint