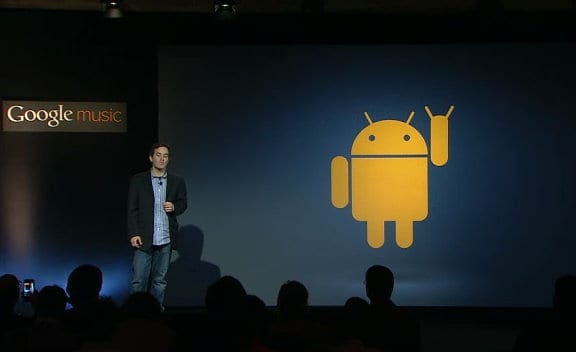 As expected Google today announced its answer to Apple iTunes at a small press conference in LA. For music fans these are good times. Now we have three heavyweights–Amazon, Google, Apple–vying for our business. I was generally impressed, despite the material being already familiar- Google Music has been in limited beta for 6 months. The big news is the ability to now buy songs and albums from Google directly.

Universal, EMI and Merlin joined the company on stage. One notable absence: Warner, who rep artists such as Madonna and Green Day.

Google has a few weapons at its disposable that could help get it a leg up on Apple and Amazon:

— Over 200 million Android devices worldwide have been activated, with 550,000 devices being added every day.

— Google Plus continues to grab headlines (even if some of them dispute its success) and has grown a loyal user base in record time; with Google Music you can share tracks with up to 2 of your G+ contacts – a feature that differentiates the service from iTunes and Amazon Cloud Player.

1. Music Manager (Linux, Windows, Mac) – used to upload your collection to the cloud, aka your “locker”. Play counts and ratings are maintained. An updated version of the tool was released today and is available now.

2. Stream on any device or the web – apps are available for Android and can be accessed via the Web on iPad.

The service is “completely free”.

music.google.com – now officially out of beta

In addition to taking Music out of beta, Google took the wraps of its new music store. Customers can now buy apps, books, movies, and music on Android market. 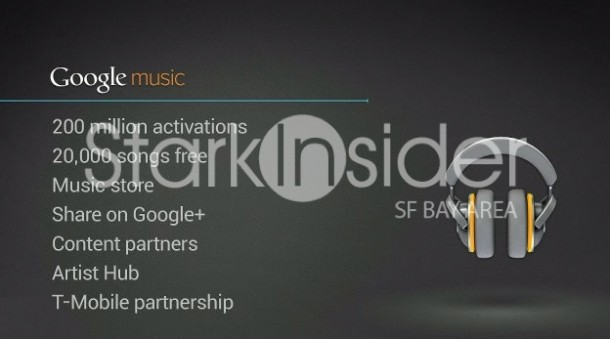 Purchases are automatically added to your locker

Google is off to a strong start, even without dropping a huge wowza. With it social network (Google Plus), and ubiquity (Google Search, Gmail), Google Music has key advantages over Apple and Amazon right out of the gate. With over 50% market share, Android is a serious footprint, and could get the service in front of a lot of people, quickly.

Being an Android smartphone fan (currently on Moto Droid, waiting–waiting more–for Samsung Galaxy Nexus upgrade to hit Verizon), I use and love Google Music. I mean really love it. I uploaded my full 60GB collection earlier this year, and have enjoyed streaming to my Droid, and to a 7-inch Galaxy Tab tablet, without any issue. Album art works well (UPDATE: after updating the Google Music app today on a Samsung Tab 10.1 a lot of my artwork is no longer rendering; it appears OK via Chrome). The interface is simple, and fluid; it even echoes some of the Microsoft Zune design, at least to my eyes, which is certainly not a bad thing.

For consumers, choice is good. So now we have a trifecta of serious music offerings. Of course, the decision needn’t be mutually exclusive. Most, though, will likely stick with their platform of choice. For Apple iPhone 4S and iPad users, it’s hard to imagine why iTunes would be not be the preferred choice. For the rest of us, it comes down to Google and Amazon. In my testing I’ve found both services strong, and in may respects nearly identical (interface, uploading tool, buying process, etc.).