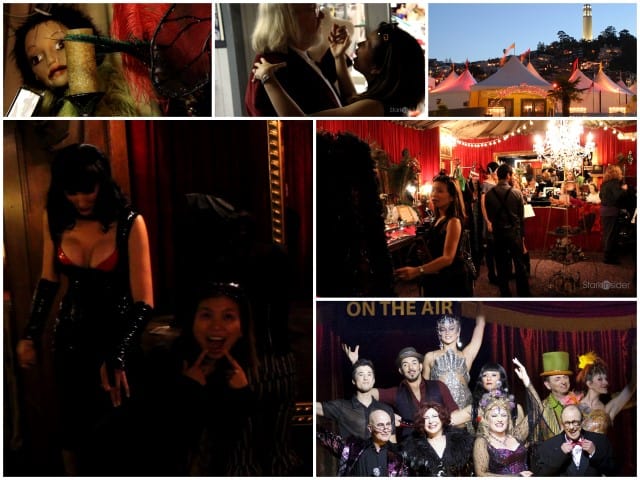 Our adventures in theater, wine, film, tech — and just about every thing else the West Coast can throw our way — continues as Loni and I head up for opening night of Teatro ZinZanni. Look for dancing, a 6’2″ Austrian Amazon (who tames Loni in a most interesting manner), a behind-the-scenes look at wardrobe, and deep Argento red, red, red everywhere.

This, however, is no ordinary opening.

True to its cabaret and circus roots, there is quite a colorful lot seen here under the glorious Spiegeltent… and the stories! What made this evening especially notable, aside from the show itself being memorable, is that On the Air is the last run for the San Francisco institution located here at pier 29 in San Francisco. Teatro ZinZanni will offer its final performance on New Year’s Eve 2011. I can only imagine how electric that will be.

What started as a 10-week project in 1988 turned into a storied run. Over 1.3 million people–including local celebrities such as George Lucas, Sharon Stone, Sean Penn and Robin Williams–have enjoyed an evening of cabaret and a gourmet meal while being entertained by the likes of Joe Baez, Geoff Hoyle, Duffy Bishop and Frank Ferrante.

The area will be redeveloped and used when the city hosts America’s Cup in 2012. So there emotions were running high, as you’ll see in a post-interview segment with legendary blues singer Duffy Bishop. Plus: what TZ video would be complete without at least one Frank Ferrante reference?!

Best of all, founder Norm Langill graciously agreed to spend time with Loni just moments before the show was set to begin. Speaking of the Spiegeltent, Langill found it on Las Ramblas in Barcelona, and was inspired to create a show around it.

“When I walked inside I was just transported, because the outside looks like a yurt,” he recalls. “And on the inside it looks like the jewel box of your dreams.”

One of Langill’s favorite aspects of TZ has been exploring breaking down the fourth wall–it’s that audience engagement that has set his show apart from others. The trick to get people to dance he says is to command them. And if they’re not up for it? “There’s lessons you learn on the playground,” he says. “If you want to play look at the person who wants to play with you. If you don’t want to play look down at your food.” I should note at this point that looking down at my food did not work when the Great Caesar himself, Frank Ferrante, was in town.