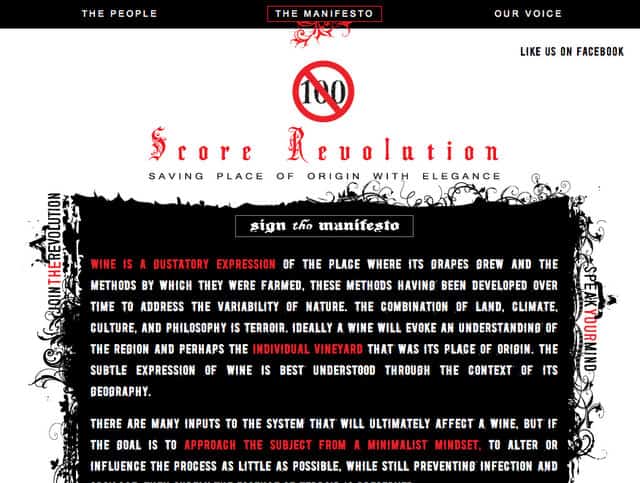 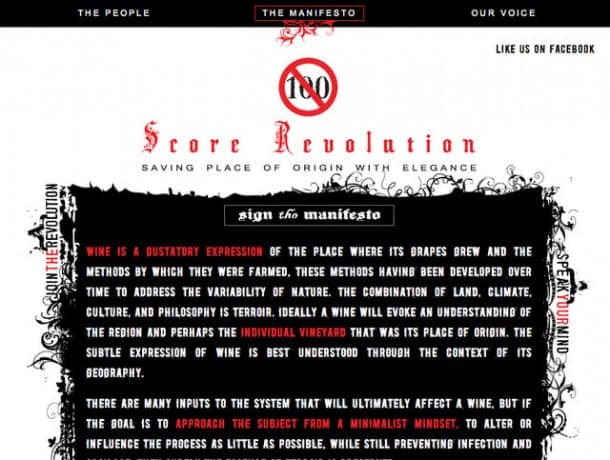 Tear it down – there’s got to be a better way…

Say you want a revolution?! Why not start with wine scores. For an inner circle of wine writers, trade, and even winemakers themselves (notably Randall Grahm of Bonny Doon), they’re increasingly the Kim Jong Il of grapes. Most recently a tongue-in-cheek “manifesto” that has emerged that is calling for a score revolution and then end of the 100 point rating system which it calls “a clumsy and useless tool” for examining wine.

The web site, true to its aspiration for an overthrow, has the look of a car crash involving Metallica, Elvira, and — oh-heck-lets-toss-in-a-funny-man-and-plug-too — Christopher Titus. It’s saucy, smile-inducing stuff, the kind of bit you might see on The Colbert Report. Sheesh, what happened to the good old days of wine, cheese and a charmed lunch in the vineyard?

Underneath the quirky satire, I suspect (well, actually I’m convinced based on the number of articles this week) that there is a serious message here, and that people are fed-up with the hegemeny Wine Enthusiast (WE) / Wine Spectator (WS) / Robert Parker when it comes to wine scores.

True enough, the 100 point scale is a pretty easy target when it comes to criticism.

For example you never see a score below 80. Essentially it’s a 20 point scale with scores ranging from 80 to 100.

Some joke we should use decimal places — for even more precision — highlighting the fact that wine scoring is highly subjective and not exactly a scientific endeavor.

But, what to replace it with, then?

I stand against everything he stands for

Here’s the problem. This manifesto, at least as far as I can tell, doesn’t stand for anything. It doesn’t offer an alternative. Based on the history of manifestos, and rallying the masses I’d humbly suggest that it’s much easier to incite action around a cause; standing on a soapbox and yelling “I cannot stand sarcasm, but I do like clever satire” may or may not be a good start (note to self). And although people march against ideas, they typically stand with far more emotion and commitment for an alternative, another way.

Some suggest badges are the answer. With the success of foursquare, maybe there’s something there (but please keep gamification away from news, well-to-doers: Decline of a Nation: Do we really need badges to read news? Google thinks so). My issue with badges is the total loss of standardization and consistency. We would need decoders for each unique set of badges; isn’t this more confusing to the consumer? Well, unless some sort of standards body were to somehow declare a magical set of badges for us all to use. Unlikely, and a scary concept.

However, I agree with noted west coast wine critic (and respected blogger) Steve Heimoff when he suggests that the 100 point system “performs a useful function.”

If it ain’t broke, don’t fix it

The ultimate test is the consumer. As long as they buy wines based on scores (check your local Costco) then there’s really not much rationale for upending the system. It could be argued that distributors, and retailers are somehow “bastardizing” the scores (and I have no idea how) and misleading consumers in that regard.

Perhaps there’s more than a bit of Parker backlash here. That could be the biggest reason why the blogosphere is calling for a revolution. It’s almost as if the man is successful to a fault. He’s created a (money making) monster, and the masses will now topple it. Queue scene of lego calculator collapsing downtown Napa on top of the WS office.

America, home of the Top 10

Scoring wine is as much about selling wine as it is evaluating it. Our culture is centered around simple concepts that allow us to hyper-read and skim information across so many devices. Things like thumbs up/thumbs down, top 10 lists, star ratings all serve a purpose to distill sometimes lengthy data and information to answer a simple question: should I spend my money to see this movie, buy that product?

Of course wine tasting is not a science. Neither is rating a movie. Or reviewing a book. Preference is a matter of… well, taste.

Last night as watched the Googlers, on a panel here in Silicon Valley, talk so passionately about search and what they do for a living, I was reminded of how innovation transforms; that without it, we’d be simply stuck — evolution is in our DNA, and we need to fight the good fight. Despite my ambivalence about the whole matter, I admit I’m perhaps beginning to see the light. What worked in the past, doesn’t necessarily pave the way to the future, even if it’s not “broken.” Plenty of these new alternatives will likely fail. Eventually, though, one will rise, and it’ll hopefully a breakthrough that we can all get behind. Starting with the consumer on this process is probably a good idea.

Tear it down! (nod to Def Leppard)

About that manifesto then. I’m not sure where it goes from here. If enough people sign it, who do they present it to? Robert Parker? Mr. Parker, tear down this wall! Or is it a grass roots sort of thing meant to inform, and motivate? Time will tell. I’ll be watching. Meantime, I need to get some badges designed.

But first, I need to stop by San Quentin tomorrow – I wonder what the hardened feel about all this hubbub?

Read this feature on Palate Press “Scorevolution” with for and against arguments, and an informative comment thread. Note: for the truly committed and wine geeks only.