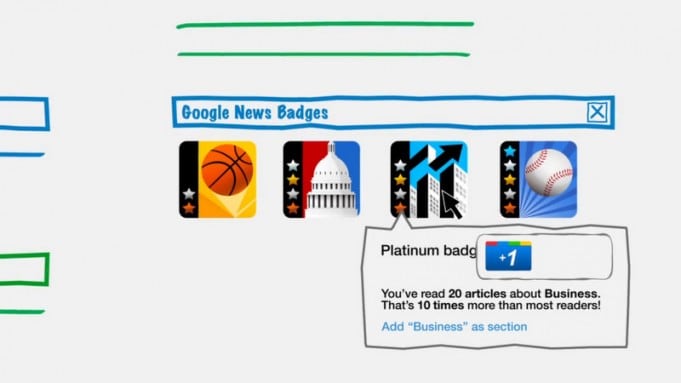 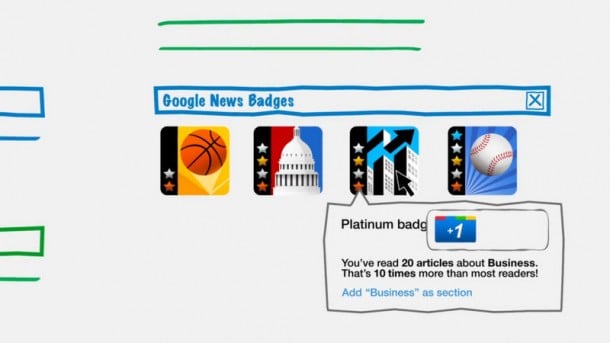 “Come badge up on Google News!”

You’re kidding, right? This is what it’s come to. A nation in decline. Massive debt issues that have the country’s top leaders in turmoil, all on the verge of an election year. Minnesota is shut-down.

But no matter. It can be fun!

At least according to Google who today launched badges for news reading. That’s right. Even our news can be turned into the superficial. All that’s needed is a dash of foursquare-like gamification.

The idea is that the more you read about a certain topic — basketball is cited in the Google video as an example — the more you “earn.” Then, you’re able to track your reading habits, share topics with friends, and presumably share them on their new social network Google+ (which is off to a respectable start: Why I Hope Google+ Succeeds).

I think the best way to categorize this one: a solution looking for a problem.

It happens all the time. Bright people generate a lot of ideas. Some are bright, others are not. Still, the innovation engine will churn, especially here in Silicon Valley. So then, badges it is!

There is a pragmatic side, though. I like the idea of personalization (1:1 marketing is dead – long live 1:1 marketing!). Although I chide Google (and I’m a massive Android fan, Chrome fan, Docs fan and more recently Google music fan… I, mean, I really, really digg this stuff folks), I can understand the usefulness of some of the concepts behind badges.

But the cynical side of me says: we’re not all Boy Scouts (although who doesn’t love earning the Vacuuming badge?). We can read the news without needing a free gumball, or cuddly teddybear.

I love Google. I don’t love this idea. Then again, history usually favors the bright people – $2.5B in Q2 profits, now that’s badge-worthy.