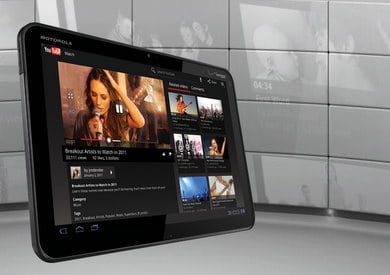 True, according to Motorola: the “long wait is over.” But will the masses care?

Both the Motorola Xoom, the tablet most likely to give potential iPad 2 buyers pause, and the clever Atrix 4G Android smartphone (AT&T), are now available. The Xoom is a heady $799, but a more palatable $599 with two year data contract from Verizon. Meanwhile the Atrix comes in at the standard $199 with two year contract from AT&T.

I predict one of these two products to be a hit.

And it’s not the chunky Moto Xoom.

The problem with Xoom and Android tablets is the well-documented lack of tablet optimized apps… a fact that Apple CEO Steve Jobs called out yesterday during the iPad 2 launch.

According to the numbers, Android, specifically Honeycomb, only has 100 optimized tablet apps. iPad has 65,000. Think it doesn’t matter? Look at the scoreboard. As they say, it doesn’t lie. In 2010, Apple shipped over 15 million iPads, generating over $9.5 billion (Billion, folks!) in revenue. Samsung and the Galaxy Tab… not so much.

I realize the apps will come for Honeycomb. And consumer choice is a huge win for all of us.

There was a time that the Android OS itself was a non-player and the Apple iPhone was “it.” But Google’s open approach sparked a revolution amongst developers who appreciated the well-conceived platform and widely available tools. Plus, vendors liked that it carries no licensing fees. Fast forward to now, and Google is a major player, perhaps even the one to beat in the smartphone race. So it could happen to tablets too.

Moto Xoom is a nice piece of hardware. Put it next to the Apple iPad / iPad 2, however, and the deficiencies become obvious. The former was designed by skilled engineers, while the latter was designed by skilled engineers and a team of people who understand the X-factor… that, humanistic element that suggests the whole is greater than the piece parts of processors, circuit boards, LCD, etc. Jobs calls it the “Intersection of Technology and Liberal Arts.” Kool-aid? Probably. But for now I’m guessing it’s the drink of choice.