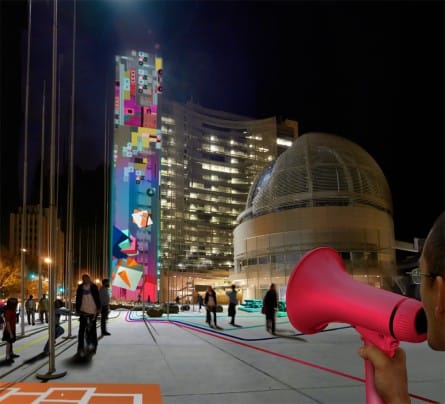 The 2010 01SJ Biennial, a techno-art festival officially kicks-off tonight with an exciting line-up of events. The biennial explores how powerful ideas and innovative individuals from around the world can make a difference and come together to build a unique and distributed city-wide platform for creative solutions and public engagement.

Plug-in-Play (above) by the LAB at Rockwell Group, a New York-based design/architecture firm known for creating “spectacle,” will be unveiled from 7pm – 9pm at San Jose’s City Hall Plaza

Prior to the unveiling, festivities include a set by The Freshmen – an LA-based trio who seamlessly bridge the classic California sound of The Beach Boys with the edgy, danceable beats of The Beastie Boys. San Jose Taiko will be in the mix as well pushing the boundaries of Taiko drumming by mixing in Electronica. And then there’s Benoit Maubrey’s Audio Ballerinas wearing tutus that have light sensors enabling them to produce sounds through the interaction of the dancer’s movements and surrounding light.

At 9:30pm, head to South Hall to catch the screening of Flood Tide: Remixed a meditative journey down a strange and meandering river that flows both ways with the tides. The handmade boats and their crews drift past empty new condo developments, explore crumbling castles and swim in iridescent quarries. Flood Tide: Remixed will screen in Empire Drive-In, a drive-in theater made out of salvaged cars, created by Flood Tide director Todd Chandler, Jeff Stark, and a handful of collaborating artists.

Under the theme “Build Your Own World,” ZER01, in collaboration with dozens of partners, will present over the course of 4 days, from September 16-19, hundreds of artworks, performances, events, and artist talks, which not only imagine the future of the world, but begin to build it. 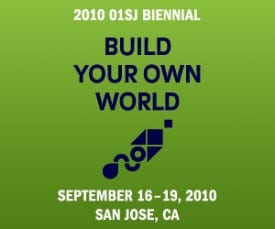 BUILD YOUR OWN WORLD
Produced by ZER01