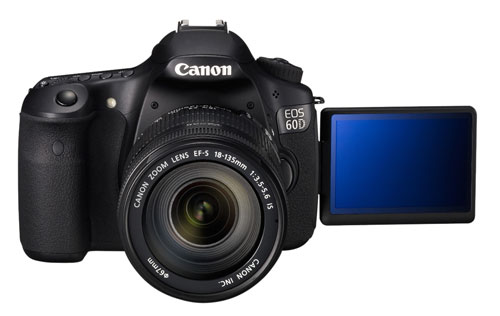 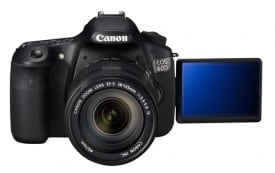 In the late 70’s Moore’s Law hadn’t yet caught up to the world of photography. The successful Canon AE-1 range, for example, was introduced in 1976. But it wasn’t until two years later that the A-1, the successor and new flagship, was released (also, selling well). Then in 1987, the first EOS (Electro-Optical System) “Goddess of the Dawn” digital camera was unleashed, and a new era of hyper-rapid product life-cycles began.

And now, with the just announced Canon EOS 60D, it’s deja vu all over again. Here I was, happy as a lamb, enjoying the stellar Canon Rebel T2i (550D) which was just released at the beginning of this year. Thanks to a EOS-FD adapter, I was even having a ball using the Stark’s collection of FD lenses. The shots were, as they say, blew my mind.

In addition, the Canon T2i is our go-to workhorse for all the videos shot on SSC including interviews, behind-the-scenes segments in dark backstage areas, live on location events, concerts, foodie events, and more. I’ve spent so much time with T2i that I wrote about 5 tips for using it to shoot video (although I learn something new practically each shoot!).

What to do? Ah, upgrade envy; the affliction of us who spend waking moments lusting after the latest gadgets, and reading too much Engadget, CrunchGear and Stuff.tv.

Long-time friend of SSC, Jim S., wrote in immediately upon hearing about the new model: “Looks like our T2i’s are officially obsolete!!” and included a link to the CrunchGear article.

While not technically a successor to the mid-range T2i, the 60D at $1,099, only $200 more, is a tantalizing prospect. Several of the short-comings that I’ve encountered on T2i have been addressed with the new model.

Both cameras offer 18 megapixels and use the same DIGIC 4 image processor, although the 60D is faster–able to burst at 5.7 frames per second vs. 3.7 for the T2i. For me, that’s not a big deal. It’s all the little things they’ve thrown in such as the articulating viewfinder (so convenient, and something I miss from the Vixia camcorder range).

Also–finally!–the ability to manually control audio levels when using the 3.5mm input jack; on T2i you’re at the mercy of the auto-level system which can wreak havoc with volume.

In the end, I’ll be sticking with T2i for now. It even rivals trusty Droid as my all-time favorite gadget… at least for the next 60 days. Meanwhile I’ll continue to flog the T2i. We take it everywhere for SSC shoots. Wire it up with all sorts of wireless, shotguns, lens accessories and then hit the streets.

Besides, there is always the 70D or T3i. This is a war you never win. You simply try to survive, and enjoy the ride.

Half the battle is just showing up; sometimes even the most advanced gear won’t tell the story any better than just inspiration, perspiration and desperation (U2 reference there, folks).