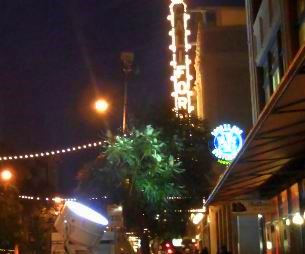 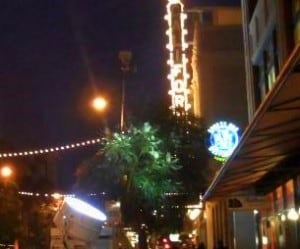 Last night the Cinequest Film Festival 20 opened with wild applause and hollering, dancing, food, and, of course, the premiere of The Good Heart. The rain couldn’t dampen the spirits of 1,100 people who enthusiastically arrived at the California Theatre for the entertaining opening night festivities. Later, the party really kicked into high gear at E&O Trading Company where a never-ending parade of food and drink kept a packed, boisterous crowd hopping all night long.

And so begins 13 days of films, forums and networking opportunities. Fun is also a huge element, and why not? This is all about the Mavericks; standing out from the herd, and showing the film world what Cinequest is all about.

As I headed to the California Theatre, I crossed my fingers that the rain would hold. For the most part, fortunately, it did. The crisp night warmed up quickly once the search spotlight lit up, and the red carpet started buzzing.

I arrived earlier to pick up our press pack for SSC, which included a stack of tickets that may require a small accounting team to sort through. There are many, many events and things to do. Boredom is not an option. As I walked the beautiful halls of the theatre—how can you not just stand in awe, soaking in all the architectural detail of this magnificently restored building?!—I immediately begain running into familiar, friendly faces. A congratulatory hug with the always popular Darnisha of the Cinequest team, followed by a short meet-up with Director Cullen Hoback; then off to Diablos Lounge.

Diablos was swanky red, and buzzing with conversations amongst fans, filmmakers and press. The mojito was a perfect way to kick off the evening. Before you know it I was sprinting back to the California Theatre to catch up with some of the artists on the red carpet.

Anna Easteden told me that she landed the role in The House of Branching Love by calling “the only talent scout” in Finland. She landed the role via auditions remotely from Los Angeles. And, by the way, she is strikingly beautiful. Adorned in a green dress, I thought she looked very much the classy star; the Nicole Kidman of Cinequest 20.

Cast and crew made their way across the red carpet, past the gorgeous lobby organ. The ever popular Cullen Hoback was a man in demand, stopping with numerous outlets to talk about his fourth wall film FrICTION.

Growing up in Canada, I’m all too familiar with organs. They go hand-in-hand with hockey. As people were being seated, we were treated to a medley of favorites including themes from Jaws and Rocky, and California Dreamin’.

Co-Founder Halfdan Hussey then appeared on stage, lit dramatically in a single spot, “Welcome to Cinequest 20! Are you ready to astound and inspire yourselves?” The applause was thunderous. I’ll tell you one thing: Cinequesters are a feisty, energetic lot!

Following the opening ceremony, we were treated to the US premiere of Dagur Kari’s witty, sardonic, and fine film The Good Heart. It was a good choice for an opener, containing all of the elements you’d look for in a Cinequest-style film: strong, often eccentric, acting; gorgeous cinematography; a story with off-beat, likable characters; and a mix of drama and comedy.

Wow. Talk about packed! This is the busiest I’ve ever seen E&O Trading Company. Just a few blocks down from the California Theatre, the party got started with a bang. Kudos to E&O for handling us Cinequesters without missing a beat. Plates and plates of appetizers made there way through a sea of people. The beer, wine, and other drinks flowed freely. And despite the onrush, the service was excellent. You could tell; people were smiling, striking up conversations with friends, filmmakers, and talking enthusiastically about The Good Heart.

So, bring on the films! A superb opener. Congratulations to the Cinequest team.

I have to pinch myself, it seemed like just yesterday we were counting down with something like 23 days to go. I wondered how I’d get through the 12 screeners we were previewing. And somehow we did. And now we have 60+ more feature films to cover. I’m not sure it’s even possible, given some of the schedule overlap, and, we’re only human. And, oh yes, there’s the thing called a business to run. I’m going to give it a shot. Stay tuned for more updates, stories and adventures.

Life in One Day (review)