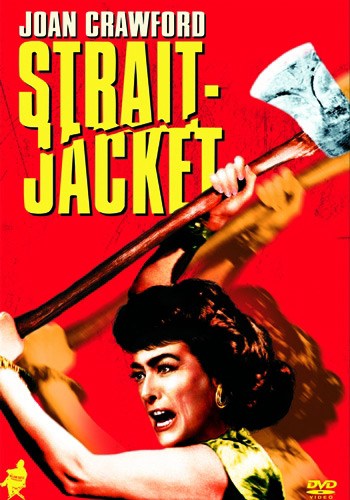 A woman scorned is one thing. But when it’s Joan Crawford, just released after 20 years of hard time in an asylum, everything is edgier.

Looking very much the parody of her legendary-self, she swings, chomps and howls her way through a nice few days in the country, while fellow cardboard actors fade to the background. It’s camp film-making in it’s highest form, by none other than William Castle.

I loved every second of this film — both times that I’ve seen it. But let me explain. 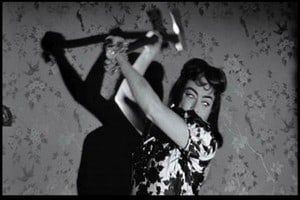 With the success of ‘Whatever Happened to Baby Jane’, a much darker, sinister film oozing melancholy and sadness, Castle capitalized and went on a tear with what are now referred to as “the hag” movies in the mid-60s. Featuring prominent actresses past their primes, namely Joan Crawford and Betty Davis, the films revived their careers and oddly seemed to pave the way for many of the 80s horror slashers such as Friday the 13th.

‘Straight-Jacket’ though is extremely entertaining camp, though, and unlike a serious horror film, it relishes in it’s cheeky exercise in absurdity.

For a moment I thought it was brilliant stuff, that Hitchcock had surely borrowed liberally from it in making his classic ‘Psycho’. A quick check on IMDB and I realized my mistake that this movie came out 4 years after. You can see that schlockmeister William Castle was the one doing the liberal borrowing: the music cues, suspenseful scenes in the bathroom, shadows.

With the Joan wig and mascara paint on full red alert, and axe somewhere in tow, it’s no wonder the guy was too stupefied to high tail it out of there.

Above all, is the twist. And it’s a good one. Again Hitchcock-inspired. But it had me guessing.

Many times, Crawford appears to be holding acting classes. In one scene near the end of the film, she brazenly storms across a bedroom, and gazes out the window as she ponders her fate. The other actors appear to fade, reacting with stunned silence, or junior acting school technique, as the legendary Hollywood actress chews everything up.

That, plus she plays a character in her 20s earlier in the film’s flashback prologue, then an older (and possibly redeemed) woman, although still younger than her real age. All the while making passes at her daughter’s boyfriend. With the Joan wig and mascara paint on full red alert, and axe somewhere in tow, it’s no wonder the guy was too stupefied to high tail it out of there.

But then we’d never know if Joan Crawford was a woman scorned or a woman healed.