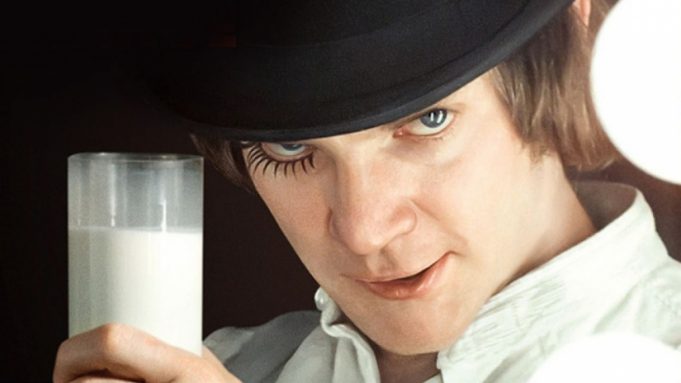 A Clockwork Orange is a challenging movie and not for the squeamish. Not that there is anything particularly graphic or profane by today’s standards. But the sometimes casual manner in which violence is portrayed against the backdrop of classical music along with Kubrick’s alternative world of milk, “Cockney rhyming slang” and dystopia, pretty much ensures you’re not in for a feel-good Hollywood event.

“There was me, that is Alex, and my three droogs, that is Pete, Georgie, and Dim, and we sat in the Korova Milkbar trying to make up our rassoodocks what to do with the evening. The Korova milkbar sold milk-plus, milk plus vellocet or synthemesc or drencrom, which is what we were drinking. This would sharpen you up and make you ready for a bit of the old ultra-violence.”

The experience of Clockwork is memorable. I’ll never forget the opening seen of Alex DeLarge staring into t

he camera while drinking milk with his thugs in the Korova Milk Bar. The movie kept me transfixed from that moment forward. Watching the movie at times is like passing a car wreck, you know the scene will be disturbing and you should look away, but you feel compelled to stare. Even closer. What is this all about?

Malcom McDowell is brilliant, embodying a character so
completely, and convincingly, that everything else is eye candy to his
psychopathic rants.

Watching the movie at times is like passing a car wreck, you know the scene will be disturbing and you should look away, but you feel compelled to stare.

I also love the look of this movie. You can tell it is Kubrick: the tracking shots, odd angles, simple setups and framing with lots of color. You could intertwine scenes from The Shining and Eyes Wide Shut and still come away with a consistent style, even though this was made in 1971.

The main reason I watched it again was to see how good it looks on Blu-Ray. And it is fantastic. It’s exciting to see classic movies get a high definition treatment that makes them look so crisp, colorful and vibrant. I agree with some of the criticism on this particular transfer that perhaps it’s not quite as good as say 2001: A Space Odyssey (amazing picture quality). While that’s possibly true, I think some of that owes to the style Kubrick was going for in this movie: lots of whites, slow motion, and sense of imbalance.

A Clockwork Orange is undoubtedly another Kubrick masterpiece. And like every other one of his films, not one for the masses. And of course that’s what makes it a challenging, exciting film worth repeat viewings, especially on a high definition big screen.

Clint says: A classic worthy of its reputation, although a popcorn date movie it is not.