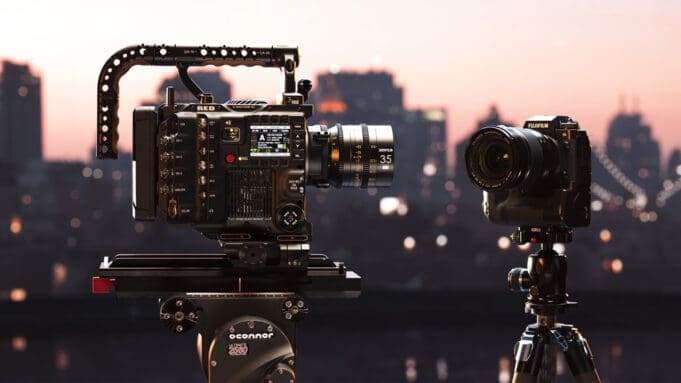 It’s called Camera to Cloud, and it might save you time (and money) next time you’re shooting footage for your video project.

Both the Fujifilm X-H2S and RED V Raptor (and XL) will be the first cameras to support the new Adobe feature. Basically the camera will upload directly to the cloud (Frame.io). That means you won’t need to bother removing media cards and copying them. And, according to the release, you don’t even need to download the files locally.

Per the blog post on Frame.io announcing Camera to Cloud:

With the Camera to Cloud integration now built directly into the cameras, we’ve taken the next step toward the cloud-based workflow we’ve been envisioning—no additional hardware, and no hard drives required.

Keep in mind you will need a high-bandwidth connection for this to work — makes sense given the size, for instance, of REDCODE 8K video footage. Wi-Fi and ethernet are supported for internet connections.

In addition you can also upload a ProRes proxy. With those smaller files you’ll at least be able to get editing while the higher resolution version continues to upload.

Quite interesting that the Fujifilm X-H2S will be the “world’s first digital camera to natively integrate with Frame.io Camera to Cloud.” The X-H2 has received strong reviews after launching earlier this year and represents perhaps Fuji’s strongest move towards a video-centric hybrid camera, eschewing its photo-focused top plate dials found on other its other models.

Keep in mind the X-H2S integration won’t be available until Spring 2023. Also note that to use the feature you’ll need to get the FT-XH file transfer vertical grip which per dpreview will enable speeds up to 600 MB/s.

Meantime, the equivalent integration for Cloud to Camera for the RED V-Raptor and V-Raptor XL is expected for the end of this year. And, again, you’ll be able to upload 8K REDCODE RAW files directly from the camera to the cloud without the need for dealing with removable media or local downloads.

Camera to Cloud could be an helpful feature for fast turnaround productions. As the shooting team is working and shooting scenes, the editing crew could be working in almost real-time fashion as footage becomes available in the cloud.

The announcement was made as part of the Adobe Max conference. You can watch the clip below introducing the new in-camera integrations for RED and Fujifilm:

Is Cloud the Future of Camera Storage?

I think maybe yes. And no.

I can see mirrorless camera manufacturers such as Sony and Canon and Panasonic possibly incorporating this kind of feature in future models and firmware updates. Not just for Frame.io, but why no also for the myriad of cloud storage providers such as Dropbox, Box, Microsoft OneDrive, Google Drive, AWS, Backblaze (one of my favorites!), etc.?

The workflow would be slightly different than Frame.io of course,  but the central idea of “no hard drives required” remains. Instead your camera uses Wi-Fi to directly upload footage to a service of choice, and off you go into the edit bay, eliminating file transfers in the process.

On the other hand, backups are going to continue to be critical, so there’s nothing quite like taking out that SD card or RED mag or SSD and making copies onto local hard drives. Several times over. I don’t think that’ll change. Then again, cloud storage just gives you one more option or possibility to explore when crews are trying to find workflow and collaboration efficiencies.

Overall kind of a neat feature. Not something all of us will use or even consider, but for those with an X-H2S or RED and engaged in the right kind of project the cloud option could be compelling.

Disclosure: My wife works at Adobe. (and she has on more than one occasion been subjected to a bug rant about Premiere Pro).