These days you’re in luck. Sony, Panasonic and Fujifilm have some great new options. Content creators, wedding filmmakers, influencers, corporate video teams, and videographers of all types should be pretty excited — these three new mirrorless options are highly capable cameras, but come in at reasonable prices (especially considering inflation!).

Also, these camera bodies are quite compact relative to some of the more expensive and bulky cinema cameras. So you’ll easily be able to throw these into a travel bag and enjoy some quality video while on the road.

But, if you’re like me, three new models in particular have caught your attention:

… and the decision is a tough one. All of them are superb cameras receiving solid reviews on the video side of things.

When the pandemic hit I sold my GH5 kit knowing we would not be working in the field for a while and now that Covid has eased we’re looking to start shooting bits and pieces and experimental videos for posting here on Stark Insider.

I initially thought the choice would be obvious: GH6 all the way. After all, I spent years with the GH5. I was familiar with the controls and ergonomics and was comfortable working with the footage in Premiere. Plus, that IBIS (in-body image stabilization) is bonkers good. With handheld you can achieve near gimbal like performance. It’s really amazing. Even, as I discovered, when using manual cinema lenses such as those made by Rokinon.

However, this year along we’ve been quite spoiled when it comes to mirrorless cinema cameras. In addition to the GH6, both Sony and Fujifilm released appealing options in the FX-30 and X-2Hs. Like the GH6, both are hybrid cameras that take photos in addition to shooting video, but lean heavily on video specs making them perfect for those who like me are mostly interested in the latter.

Here’s a brief run down on my thought process and eventual pick. Almost. Well, let’s see…

(in no particular order)

Sony surprised me with this one. Just announced, this tiny beast called the FX30 retails for $1,798 and ships soon. It looks to me to be a purpose-built mirrorless cinema camera that does have photo capabilities on the side, but is really targeting video shooters. The FX30 seems to be a a great primary camera for many videographers while also being a great option as a b-cam/crash cam for big productions invested in Sony, or renting Sony. Officially Sony even brands this model as part of its “Cinema Line” and is likely positioning it also as a stepping stone to step-up models such as the FX-30, FX9 and Venice cameras. Consequently you’ll find S-Log3 which should, in theory at least, grade the same as others in the family, meaning you’ll get a consistent image across the board — handy when color matching several cameras for a production.

In any case here’s my thoughts about the FX-30. Keep in mind this is coming from a solo operator shooting short films, experimental videos, and is not concerned at all about the photo capabilities. I don’t have crew so no focus puller, no AC, no sound person, etc. I’m looking for a lightweight camera to travel or carry around locally when I want to run-and-gun without the fuss of setting up something heavy and wieldy and less discrete such as the RED Dragon.

As you’d expect the GH6 is the natural successor to the GH5, and it looks the part, both on paper and aesthetically. Panasonic’s experience with the GH line has been refined to near perfection, or so it would appear in my research. This is a highly capable camera with a deep light of features. You’d get just about anything you’d want here including the best filmmaking assist tools around (waveform, vectorscope), anamorphic support, 5.7K video, 4:2:2 10-bit internal Apple ProRes, IBIS, V-Log flat picture profile, plenty of high-speed options for slow motion, and a nifty 100MP high-resolution photo mode should you need it.

I mean come on now. The GH6 looks to me to still be the one to beat. I did mention earlier this would be the natural choice for me and likely any GH4 or GH5 shooter looking to upgrade. But then again the FX30 is really slick and after the recent GH6 price increase offers tremendous capability for $400 less; something to keep in mind. One thing I never really did like about the GH5 (and it’s hard to find any faults) was the digital nature of the image quality. Even with noise reduction and sharpening dialed down I found things looking quite digital — nothing close to the incredible organic and gorgeous stuff you’d find on early Blackmagic cameras. So I’d dirty it up in post with film grain and other effects to (try to) approximate the film look I so adore. In any case I wonder if the GH6 has improved in this regard? Online footage looks quite nice. Regardless, some other thoughts below.

Things I don’t like or I’m not so sure about on the GH6:

Fujifilm has always tempted me. For whatever the reason, Fuji cameras always tend to have the best footage online. It’s almost always organic and even dreamy. In short it looks to me like cinema. Bergman! Fellini! Tarkovsky! You name it you may find that look here. As for the skill…

With the X-H2S, Fuji has modified the top plate and done away with its traditional photography dials, and in a nod to videographers implemented something more useful for shooting video. That’s very welcome and makes the X-H2S a really serious hybrid option. Specs-wise everything seems in order: flippy screen, 4K/120, internal ProRes, IBIS, full-size HDMI connector (like the other two above), excellent AF, external ProRes RAW. When it comes to shooting video for Stark Insider, Fujifilm is the one I have the least experience (just a X-T3 rental years ago). I have shot a lot on the GH5 as well as Sony (a6000, a6500, a7 III) and lots of Canon DSLR (60D/70D/80D). So the world of Fuji is a bit foreign to me. Nevertheless, the X-H2S seems to be a compelling option.

Things I don’t like or I’m not so sure about on the X-H2S:

Obviously there’s other choices out there.

You may also want to consider mirrorless bodies such as the OM System OM-1 (Olympus), the full-frame Sony FX3, Canon EOS R10 or R6, among so many more. Even the overlooked full-frame Sigma fp seems like an intriguing consideration for those shopping for a cinema pure play. And when talking about this category we can’t fail to mention the popular Sony Alpha a7 III, also priced similarly to its rivals.

I shortlisted the FX30, GH6 and X-H2S because they are the most appealing options for me, and all come in relatively close in price and features.

Also, let’s not forget the phone in your pocket or purse. Be it an Android or iPhone chances are it will shoot pretty good video, and, in the case of the iPhone Pro models, outstanding video. In my experience, though, shooting on a phone has downsides including an overly sharpened and crappy looking image quality when it comes to film approximation (man I love that term it seems). Then there’s the fact you need to fill up your phone’s internal memory with footage and copy it over using a cable. A pain compared to using removable media. For content creators and influencers none of this will be a problem as quickly shooting video, editing it (in phone) and uploading it to YouTube and Instagram and TikTok will be the ultimate priority — and a phone will be unbeatable in that use case. I digress. 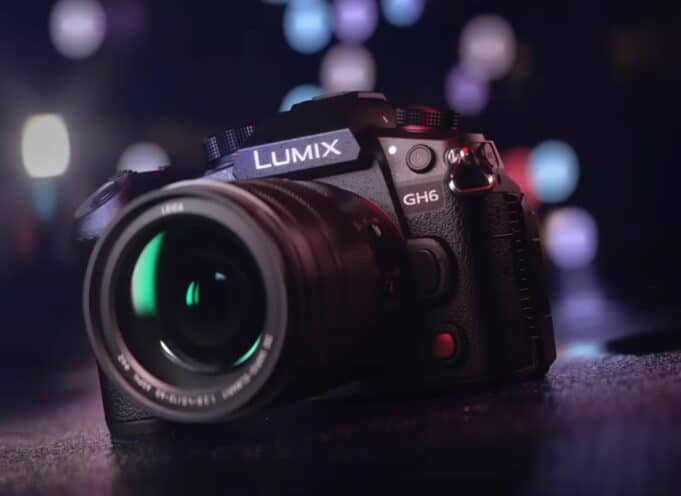 I just can’t deny the overall package of greatness that Panasonic has put together with the GH6. You may not shoot anamorphic today, but isn’t it nice to know the feature is there if you want to experiment in the future? And Panasonic just gets all the basics right. Grip the camera and use it to shoot some video projects and you’ll quickly appreciate the ergonomics. Try some IBIS and you may not even need that bulky gimbal on your next shoot.

Concern for the MFT mount/sensor? Forget all that. Bro, that ain’t going to make or break you. What matters most is all the things I haven’t mentioned here including lighting, camera movement, set design, story/script, blocking and all the stuff that makes, as they say, the mise en scène. So let’s not forget the camera is a tool. Just a basic tool. Any concern over MFT is just clickbait and wasted forum talk. It produces an image. You can attach a lens. You can hit record. You can record a movie. Voila!

Now, you could make an argument for any of these cameras and prove me wrong a million different ways.

For those invested in Sony gear, the FX30 is a no-brainer. It’s phenomenal at a price that is almost too-good-to-be-true. Slam dunk.

For those who want both quality photos and quality video without compromise, well it’s darn near impossible to beat the APS-C-based Fujifilm X-H2S. Amazing stuff.

For me, though, the GH6 is through-and-through the killer package for us video shooters. I’ll admit I did pre-order the FX30 and still have not cancelled it. My ultimate choice did indeed wind down to the Panasonic or the Sony. A really tough call. In the end my positive experience over the years with the GH5 surely tilted the playing field.

Needless to say this is far from an exhaustive comparison and represents one person’s experience. I highly recommend you go dig deeper if need be. Places like dpreview.com and Newsshooter have loads of detailed content on all three of these cameras.

Meanwhile, I should stop writing this post now, and switch gears and finish story-boarding that Stark Insider perfume commercial project I’ve been working on…